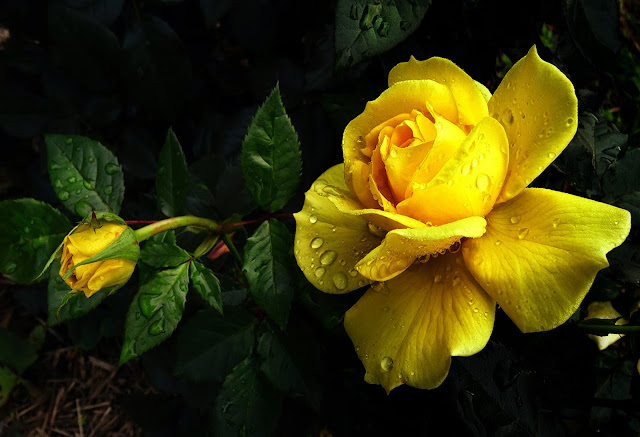 “You cannot eat apples planted from seeds. They must be grafted, cloned…” - Michael Pollan

I’ve had a break from Poets United for a few weeks as I have had to attend to several pressing work matters and these did not allow my mind to turn to poetry. As things slowly get back to normal, today’s theme of “Flowers” at Poets United inspired this, my offering for the Midweek Motif this week:

Looking at Spring flowers in the garden
Blooming recklessly in the cold wind,
Fulfilling with expediency their purpose,
Repaying in full the gardener’s ministrations,
Reminds me of their origin:

Hailing from some humble wild blossom,
Carefully cultivated for years on end;
Torn from the fickle hillside and grown under glass,
Long inbred, carefully tended, crossed –
So that each new generation breeds true.
Once pale and fresh but insignificant,
Now a gaudy, dazzling display of colour,
But lucklessly sterile…

As for their propagation,
They rely on cuttings,
And the gardener’s whimsical affection,
Their seeds but a distant,
Almost forgotten remembrance...

PS: "Double-flowered" describes varieties of flowers with extra petals, often containing flowers within flowers. The double-flowered trait is often noted alongside the scientific name with the abbreviation fl. pl. (flore pleno, a Latin ablative form meaning "with full flower"). The first abnormality to be documented in flowers, double flowers are popular varieties of many commercial flower types, including roses, camellias and carnations. In some double-flowered varieties all of the reproductive organs are converted to petals — as a result, they are sexually sterile and must be propagated through cuttings. Many double-flowered plants have little wildlife value as access to the nectaries is typically blocked by the mutation.
Posted by Intelliblog at 01:36