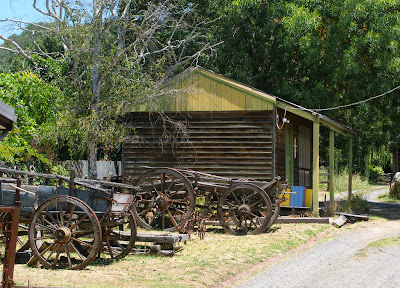 “Art is everywhere, except it has to pass through a creative mind.” - Louise Nevelson
http://www.artnet.com/artist/12506/louise-nevelson.html

We had a lovely day out and about today despite the crippling heat (the mercury was hovering around the 40˚C mark!). We left our hotel early in the morning and had a great walk tot eh Festival Centre, whose café serves one of the best cappuccinos in Adelaide. The view over the river Torrens is magnificent and sitting gazing out across the lovely lawns, listening to the chirping of the birds and sipping on the coffee while munching our hot croissants was a great way to start the day.

We then walked to Grenfell St and caught the bust that was heading out to the Adelaide Hills. The buses are comfortable and air-conditioned and for $4.50 one is taken up the hills to the beautiful small towns and villages there. There is Stirling and Bridgewater, Mt Lofty and Macclesfield and Birdwood, but surely one of the most famous towns, is Hahndorf - Australia's oldest surviving German settlement, about 28 km SE of Adelaide. There's still a strong German flavour in Hahndorf, evident in the smallgoods outlets, German bakeries and the souvenir shops selling German figurines and cuckoo clocks that line the bustling Main Street.

The Cedars is the former home and studio of artist Sir Hans Heysen, still owned by the Heysen family. It houses a fine collection of paintings and drawings displaying Heysen's remarkable versatility in subject and medium. Also on the grounds, Heysen's working studio, his painting materials and tools, sketches, notes and more are to be seen.

We visited the Hahndorf Academy - a regional centre for the arts and heritage based in a charming 150-year-old building. We walked through its four galleries, migration museum, artist's studios, retail gallery and enjoyed viewing some really good work by the Academy’s students.

The history of Hahndorf starts in 1838 when George Fife Angas went to London as a director of the South Australian Company to try and promote colonisation. While he was there he met Pastor August Ludwig Christian Kavel who was trying to organise for Lutherans (who were being persecuted by the King of Prussia, Friedrich Wilhelm III) to emigrate. Angas was moved by the plight of the Lutherans and not only persuaded Kavel that South Australia was a suitable place for emigration but also financially assisted them with a generous £8,000. The first German settlers arrived on 25 November, 1838 at the unfortunately named Port Misery. These settlers were to establish distinctly German villages at Klemzig, Glen Osmond, Lobethal and most famously Hahndorf.

Hahndorf's history is connected to the arrival at Port Adelaide, on 28 December, 1838 of the 344 ton ship, Zebra, under the control of Captain Dirk Hahn. He was impressed by his passengers to such a point that upon their arrival in South Australia he was determined to help them. Although a Dane it is he who is honoured with his name being the basis of the town's name.

The ship was carrying 187 German immigrants. For a time the immigrants lived in tents at Port Adelaide then Hahn came to an agreement to rent 150 acres of land (this was the present site of Hahndorf) which would be divided up so there was 38 acres for living quarters and the rest for farming. Later the grant was expanded to 240 acres. A group of twelve men on horseback and some ladies in a carriage travelled to inspect the site and Hahn was so taken by it, that he said: “It seems to me as if nature had lavished her choicest gifts on South Australia, I should like to end my days here and never return to the busy world.”

The conditions for settlement were generous. The Germans were given provisions for the first year. They were also provided with a preacher and a substantial amount of livestock. All that was required was that they worked hard and produced a reasonable return on the land and livestock. Not surprisingly the early settlers worked hard planting crops and grazing the cattle they had been given. They all contributed to the construction of a church, which was completed within a year of the settlement.

Within the first decade the town prospered. Vineyards were established, the women worked as shepherds, the men hired themselves out to the surrounding landowners as cheap labour and slowly substantial houses, many of which still stand, were built. However, the town was struck by intense anti-German feelings during World War I (rather stupid given that most of the residents could trace their origins back to 1839) and the name was changed to Ambleside by a 1917 Act of Parliament. The German Arms Hotel, for example, became the Ambleside Hotel and did not change its name back until 1976.

We spent several hours in Hahndorf, enjoying the attractions the town has to offer. Sure enough it is a very touristic place, but nevertheless, it still retains its charm and is certainly worth a visit if one is in Adelaide. There is no shortage of places to have lunch or dinner at and although there are many eateries with a distinctly German slant to their menu, one may also enjoy contemporary Australian cuisine, Mediterranean delights as well as many styles of Asian cooking.
Posted by Intelliblog at 10:12