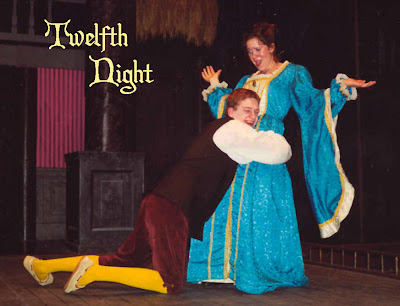 "O Mistress mine, where are you roaming? O stay and hear! your true-love’s coming." Shakespeare

Today is Epiphany Eve and Twelfth Night, tomorrow being Twelfth Day. As Epiphany Eve was associated with the arrival of the Magi, in many countries children expected to be left gifts in their shoes or stockings. In Italy, an ugly but kind witch, called La Befana, came and distributed sweets and presents to the good children. In Syria, children were brought presents by the smallest of the Magi’s camels. This is because according to tradition, the other two camels lost their determination and strength on the way to Bethlehem and they were about to give up. The smallest camel, however, refused to give up and was rewarded by Jesus with immortality for its belief in Him.

The Twelfth Night of Christmas: Tradition has it that Christmas celebrations are to end today and decorations should be taken down on this day. However, a sprig of holly should be retained in the house to protect the occupants against lightning. Twelfth Night celebrations were once very popular and traditionally, this night was one of the merriest in the Christmas season. Twelfth Night parties were held everywhere, ostensibly to celebrate the arrival of the Magi in Bethlehem, however, many of the traditions surrounding the Night’s celebrations were pagan in origin.

A Twelfth Night cake was baked and a single bean was hidden in it. The person who found it in his piece became the Bean King for the Night. This tradition hails back to the Roman Saturnalia where a King was chosen by lot. The bean was a sacred seed in ancient times. A pea was sometimes baked in a cake in order to choose a Twelfth Night Queen, also. These cakes have now merged with the tradition of the Christmas Cake and the Christmas Pudding (the latter which may contain the silver sixpence to determine the lucky one amongst its consumers.

At the Twelfth Night party, it was customary to draw cards, on which were represented certain stock pantomime-like characters, exemplifying humorous national traits, for example, Farmer Mangelwurzel, François Parlez-Vous and Patrick O’Tater. People had to act out the part of their chosen character and also submit to the humorous “commands” of the Bean King. Much laughter, good humour, fine food and drink were expended on these occasions.

Here is a scene from Shakespeare’s “Twelfth Night”, with Feste’s Song (just be a little patient!):

O Mistress mine where are you roaming?
O stay and hear! your true-love’s coming
That can sing both high and low;
Trip no further, pretty sweeting,
Journeys end in lovers’ meeting—
Every wise man’s son doth know.

What is love? ’tis not hereafter;
Present mirth hath present laughter;
What’s to come is still unsure:
In delay there lies no plenty,—
Then come kiss me, Sweet-and-twenty,
Youth’s a stuff will not endure.