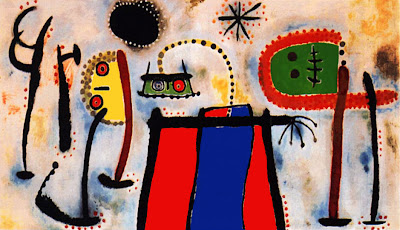 “I feel the need of attaining the maximum of intensity with the minimum of means. It is this which has led me to give my painting a character of even greater bareness.” - Joan Miro

Joan Miró was born on April 20th, 1893, in Barcelona, Spain and died December 25th, 1983, in Palma, Majorca. He was a Catalan painter who combined abstract art with Surrealist fantasy creating highly distinctive works. His mature style evolved from the tension between his fanciful, poetic impulse and his vision of the harshness of modern life. He worked extensively in lithography and produced numerous murals, tapestries, and sculptures for public spaces.

Miró's father was a watchmaker and goldsmith. According to his parents' wishes, he attended a commercial college. He then worked for two years as a clerk in an office until he had a mental and physical breakdown. His parents took him for convalescence to an estate they bought especially for this purpose and in 1912 they allowed him to attend an art school in Barcelona. His teacher at this school, Francisco Galí, showed a great understanding of his 18-year-old pupil, advising him to touch the objects he was about to draw, a procedure that strengthened Miró's feeling for the spatial quality of objects.

From 1915 to 1919 Miró worked in Spain painting landscapes, portraits, and nudes in which he focused on the rhythmic interplay of volumes and areas of colour. From early in his career Miró sought to portray nature as it would be depicted by a primitive person or a child equipped with the intelligence of a 20th-century adult; in this respect, he had much in common with the Surrealists and Dadaists.

From 1919 onward Miró lived alternately in Spain and Paris. In the early 1920s Miró combined meticulously detailed realism with abstraction in landscapes. He gradually removed the objects he portrayed from their natural context and reassembled them in eerie collections in shimmering detail-less backgrounds.

From 1925 to 1928, under the influence of the Dadaists, Surrealists, and Paul Klee, Miró painted “dream pictures” and “imaginary landscapes” in which the linear configurations and patches of colour look almost as though they were set down randomly. The poet André Breton, the chief spokesman of Surrealism, stated that Miró was “the most Surrealist of us all.” In the 1930s Miró became more experimental, working with techniques of collage and sculptural assemblage and creating sets and costumes for ballets. He designed tapestries in 1934, which led to his interest in the monumental and in murals. His paintings began to be exhibited regularly in French and American galleries.

At the time of the Spanish Civil War in the late 1930s, Miró was living in Paris. During World War II Miró returned to Spain, where he painted a series of small works scattered with symbols of the elements and the cosmos, expressing the happy collaboration of everything creative. During the last year of the war (1944), Miró, together with his potter friend José Lloréns Artigas, produced ceramics with a new impetuosity of expression: their vessels were often intentionally misshapen and fragmented.

In the years following World War II Miró became internationally famous; his sculptures, drawings, and paintings were exhibited in many countries, with many commissioned works taking up his creative energies. In spite of his fame, however, Miró was an introverted man, and he continued to devote himself exclusively to looking and creating. In his late works Miró employed an even greater simplification of figure and background. In 1980, in conjunction with his being awarded Spain's Gold Medal of Fine Arts, a plaza in Madrid was named in Miró's honour.
Posted by Intelliblog at 23:04