WILL THE REAL INSPECTOR CLOUSEAU STAND UP? 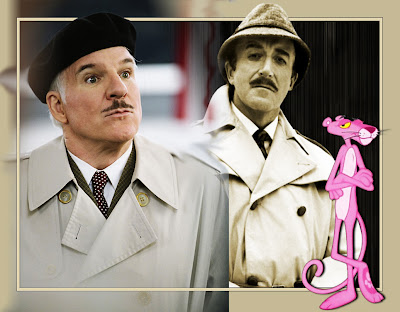 “A day without laughter is a day wasted.” – Catullus

Do you remember the old “Pink Panther” movies with Peter Sellers? There was a rash of them in the 1960s and 1970s, beginning with the very first one in 1963 (“The Pink Panther”) and the last one in 1978 “The Revenge of the Pink Panther”. Some people dislike Peter Sellers, but I ma big fan of his and certainly even the people who dislike him must admit that he created some wonderful characters on screen. The bumbling Inspector Clouseau is one of these and the Pink Panther sequels are certainly testimony to the fact that people lapped these films up. I was one of them and remember the laughs we had in my youth watching all these films.

It was with trepidation that I picked up a DVD from the “specials” bin in the DVD store I shop in and saw that Steve Martin had decided to do a remake of the Pink Panther movie. “Sacré bleu!”, I thought, “This is sacrilege!” It must have been quite a courageous thing to do, even for someone with the comedic talents of Steve Martin (another of the actors who some love other hate). Even though the DVD was remarkably cheap (that in itself also quite suspicious, as the film was made in 2006), I was debating whether to get it or not, given the fond memories I had of Peter Sellers in the original Pink Panther movies.

Well, I did buy it and we got to watch it last weekend. OK, it was different but I think one has to give Martin his due. He is not trying to be Peter Sellers, he pays tribute to him. The film is not a remake, it is like a sequel, or rather a parallel universe Clouseau. The script is very entertaining (Martin co-wrote it with Len Blum) and the gags, although commonplace, work effectively in a juvenile way (but then again, that’s how the original gags in the Sellers series were). These are movies to have a laugh over, they are not out to win the Nobel prize…

There is quite a lot of repressed sexuality in the film and many double entendres, however, relatively well shielded o the youngsters can still watch and not be distracted by smut. Overall I was pleasantly surprised and was once again won over by Steve Martin and his Gallic antics. Inspector Dreyfuss, played by Kevin Kline was rather disappointing, but Jean Reno plays Clouseau’s side-kick very effectively. Beyoncé Knowles has a guest role as a singer involved in the murder investigation and of course she sings the regulation song. See the movie for a bit of light-hearted fun. Don’t expect Sellers, and enjoy Steve Martin.
Posted by Intelliblog at 01:57