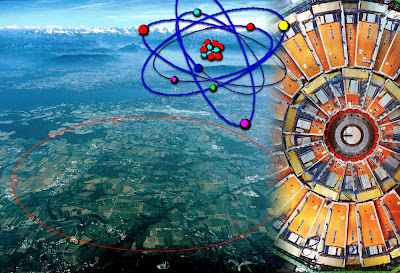 The word for the day today is HADRON…

hadron |ˈhadˌrän| noun Physics
A subatomic particle of a type including the baryons and mesons that can take part in the strong interaction.
DERIVATIVES
hadronic |hadˈränik| adjective
ORIGIN 1960s: From Greek hadros ‘bulky’ + -on

The world has been forced to focus on the CERN laboratory in Switzerland, as a teenage girl in India has killed herself in fear that the Big Bang experiment may cause the end of the world. The 16-year-old girl, named Chayya from Madhya Pradesh drank pesticide and was rushed to the hospital but died a little later. This was caused by watching doomsday predictions made on Indian news programmes, her father said.

Doomsday predictions around the world abounded as preparations began for the start-up of Europe's Large Hadron Collider. This is a gigantic (27 km long) atomic particle-smasher designed to explore the origins of the universe. Real experiments have not yet begun, but its trial run on Wednesday was accompanied by worries that it might spawn black holes with enough gravitational pull to swallow up the whole Earth. Physicists around the world celebrated the first successful tests of the equipment yesterday.

Experiments that will begin in earnest over the next few days, could revamp modern physics and unlock secrets about the universe and its origins. The huge particle-smashing machine (one of the most complex ever built!) will simulate the time immediately after creation of the universe in the Big Bang that forced matter as we know it into existence.

Although physicists brushed off suggestions that the experiment could create tiny black holes that could cause problems with the planet, poor Chayya and many other people around the world had real fears of a fast approaching Doomsday. Technology and hard science still makes many people uncomfortable or fearful. As our knowledge of science expands and becomes more specialised and complicated, it is beyond the understanding of the average person. We may all use high technology gadgets and place our lives at the mercy of technology when we travel on jet planes, when we listen to our i-pod and watch our TY LCD screens, but not many of us really want to know how it all works.

Ignorance creates fear. Not understanding breeds awe. Rumour runs rife in populations that view technology with the same fascination that they would view magic. Distrust and suspicion hamper progress and the daunting face of the technology involved discourages many from serious study of physics, mathematics, chemistry and all of the other “hard” sciences. How can we remain level-headed when confronted with such an array of quite incomprehensible and apparently magical scientific knowledge, whose simplest everyday applications can seem like wizardry?
Posted by Intelliblog at 01:00