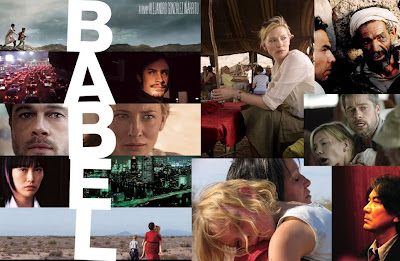 “It is well to remember that the entire universe, with one trifling exception, is composed of others.” - John Andrew Holmes

On Sunday we watched Alejandro González Iñárritu’s 2006 film, “Babel” starring Brad Pitt and Cate Blanchett. Iñárritu won the Cannes Film Festival’s Best Director award with this film and he has several other important films under his belt: “Amores Perros” and "21 Grams". This film is constructed in an almost signature way, with several interlocking stories connected by a common thread. In this case, this is a high powered rifle that makes its way from Japan to Morroco and manages to change the life of people in the USA and Mexico, as well. Brad Pitt and Cate Blanchett give good performances, but they pale into insignificance when compared to the actors playing the Moroccan family and the Mexican family, who do a really exceptional job.

An American couple holidaying in Morroco are victims of a freak accident involving kids playing with a rifle. A Japanese father and daughter try and cope with the results of suicide, while in Mexico the children of the American couple survive an ordeal in the desert after their nanny tries to do the right thing by everyone. The film is strong and cleverly juxtaposes all four stories, but it could be cut as its 138 minutes makes it drag somewhat. The cinematography and the direction are wonderful, but the impact is lost somewhat by its slow pace in parts.

Similar to the same director’s “Amores Perros” the interlocking stories theme highlights common factors of human existence at various levels of society the world over. The message is simple: The universality of humanity - what causes us pain and joy is the same all over the world and as humans we all experience the same despair and hope in similar situations.

Well worth seeing, but quite a violent film with some very graphic scenes…
Posted by Intelliblog at 01:26