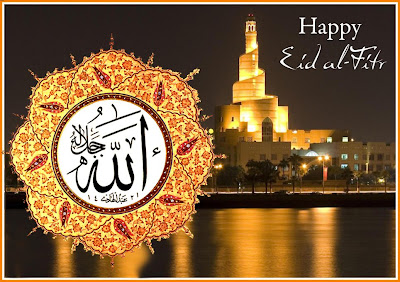 “Surrender is faith that the power of love can accomplish anything... Even when you can not foresee the outcome.” Deepak Chopra

Today is Eid al-Fitr, the joyous celebration ending the month of Ramadan in the Islamic calendar. During the month of Ramadan, Muslims observe a strict fast and participate in pious activities such as charity and alms giving and peace-making. It is a time of intense spiritual renewal for those who observe it. At the end of Ramadan, Muslims throughout the world observe a three-day celebration called Eid al-Fitr (the Festival of Fast-Breaking).

Eid al-Fitr falls on the first day of Shawwal, the month following Ramadan in the Islamic lunar calendar. It is a time to give in charity to those in need, and celebrate with family and friends the completion of a month of blessings and joy. Before the day of Eid, during the last few days of Ramadan, each Muslim family gives a determined amount as a donation to the poor. This donation is of actual food (rice, barley, dates, rice, etc) to ensure that the needy can have a holiday meal and participate in the celebration. This donation is known as sadaqah al-fitr (charity of fast-breaking).

On the day of Eid, Muslims put on new clothes and gather early in the morning in outdoor locations or mosques to perform the Eid prayer. This consists of a sermon followed by a short congregational prayer. After the Eid prayer, the faithful usually scatter to visit various family and friends, give gifts (especially to children), and make phone calls to distant relatives to give well-wishes for the holiday. These activities traditionally continue for three days. In most Muslim countries, the entire 3-day period is an official government/school holiday. In 2008, Eid al-Fitr is between the 2nd and 5th of October.

Common greetings during this holiday are the Arabic greeting EĪd mubārak ("Blessed Eid") or ‘Īd sa‘īd ("Happy Eid"). In addition, many countries have their own greetings based on local language and traditions.

The word of the day is Islam:

Islam |isˈläm| noun
• The religion of the Muslims, a monotheistic faith regarded as revealed through Muhammad as the Prophet of Allah.
• The Muslim world: The most enormous complex of fortifications in all Islam.

Founded in the Arabian peninsula in the 7th century AD, Islam is now the professed faith of nearly a billion people worldwide, particularly in North Africa, the Middle East, and parts of Asia. The ritual observances and moral code of Islam were said to have been given to Muhammad as a series of revelations, which were codified in their holy book, the Koran. Islam is regarded by its adherents as the last of the revealed religions, and Muhammad is seen as the last of the prophets, building on and perfecting the examples and teachings of Abraham, Moses, and Jesus. There are two major branches in Islam: Sunni and Shia.

ORIGIN from Arabic 'islām ‘submission,’ from 'aslama ‘submit (to God).’
Posted by Intelliblog at 01:34