ThE DORD OF THE PRONIAL BREAN... 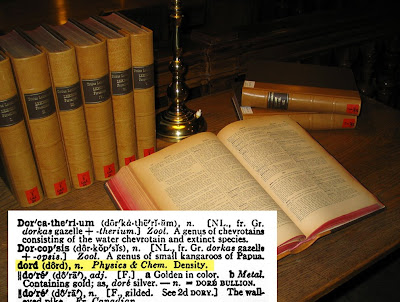 “Be not the slave of Words.” - Thomas Carlyle

Do you know what a “ghost word” is?

ghost word |gōst wərd|noun
a word that is not actually used but is recorded in a dictionary, grammar or other reference work. It usually gets into that scholarly work as a result of a misreading or misinterpretation, as by mistaking a typographical error for an actual word.

The classic example of a ghost word is the word “dord”. It began its short life in 1931 when G. and C. Merriam Company's staff included it in the second edition of its Webster’s New International Dictionary, in which the term was defined as “density”. It is due to an error made when transcribing a card that read "D or d" (meaning a capital D or lower case d) as an abbreviation for “density”, such as in “The formula for finding density is D = V/M” (Density equals volume divided by mass).

A new typed up slip was prepared for the printer and the part of speech assigned along with a pronunciation for typesetters to include in the printing. The word got past proofreaders and appeared on page 771 of the dictionary around 1934. In 1939, an editor noticed “dord” lacked an etymology (word origin, or derivation) and investigated. Soon an order was sent to the printer marked “plate change/imperative/urgent”. The word “dord” was removed and the definition of the adjacent entry “Dore furnace” was expanded from “A furnace for refining dore bullion” to “a furnace in which dore bullion is refined” to close up the space.

Since major dictionaries are very carefully compiled and edited (I should know!), ghost words are rare in reputable reference works. However, dictionary writers have been known to copy entries from one another without looking for citations, where the word is in use (i.e. in books, magazines, newspapers, journals, etc), which means that some ghost words can be propagated.

Other examples of ghost words are: “pornial”, a mistake for “primal” which appeared first in the Century Dictionary and was then copied into Funk & Wagnalls Dictionary. When the original Oxford English Dictionary was being compiled ghost words would regularly appear, or were close to appearing in the dictionary. One which almost did appear was the word “brean” The lexicographer was suspicious, however, contacted Robert Louis Stevenson directly (from whose work came the citation which contained the word) and asked him about it. It turns out “brean” was a printer’s mistake and the word should have been “ocean”.

Bad eyesight, bad handwriting, bad transcription, bad work by volunteers and bad dictionary writing practice (copying other dictionaries!) all traditionally contributed to the appearance of ghost words in dictionaries. However, apart from traditional dictionaries, there are a whole host of less scrupulously compiled word lists that pander to people’s lurid appetite for odd or unusual words. A mistake, or even a misleading definition, can definitely propagate ghost words (especially nowadays with the Internet where odd words get passed around – no questions asked!).

So if you want to know the “dord of the pornial brean”, it was less dense than today’s oceans because there was less salt dissolved in it!
Posted by Intelliblog at 21:50