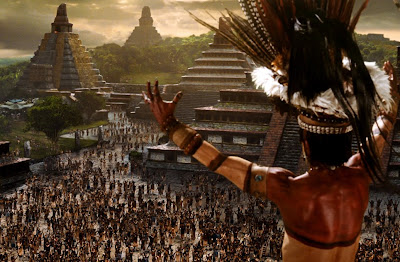 “We are born princes and the civilising process makes us frogs.” – Publilius Syrus

Last weekend we watched Mel Gibson’s 2006 film “Apocalypto”. I had been aware of the mixed reviews this film received when it first opened, but had missed catching hold of it until now, where once again I found it in the bargain bin of our local video store. The concept was an interesting one and when reading the back of the disc package I was intrigued to see that the film was in the Maya language with English subtitles. This was reason enough to see the film as I had never before had heard a single word of Mayan! This represents an authenticity that some films nowadays try to attain where one is transported to a time and place where the film-maker has attempted to recreate as much as possible the atmosphere and ambience as realistically as possible. It actually reminded of the other Mel Gibson film “The Passion of the Christ”, which was shot with the actors speaking Latin, Hebrew and Aramaic, the language actually spoken by most people at Christ’s time in Palestine. I love subtitles, so these are not an issue for me and the authenticity of hearing the right language spoken in the time and place the movie is set is a great touch.

Apocalypto is set in Central America, at the peak of Mayan civilization. The film starts innocently enough in a small village where a group of villagers hunt a tapir (yes, it is a scene full of blood and gore). Jaguar paw, is a simple villager whose idyllic life with his young family is brutally disrupted by a violent invading force of more “civilised” Mayans. The village is burnt and pillaged, many are killed and the young men are taken as slaves to the Mayan kingdom’s capital. Jaguar Paw faces certain death but through a quirk of fate he manages to escape and tries to return to his village in order to save his trapped wife and child.

In this film, Gibson combines many elements that spell success in Hollywood: Drama, adventure, hero versus villain, struggle and final redemption. However, what is novel is the exotic setting, the many authentic details (although the film is not historically accurate in its totality) and the richness of the striking visuals. The movie is very violent and if human sacrifice depicted graphically will disturb you then this is not the film for you. This is a major problem with the accuracy of the movie as it was the Aztecs and not the Mayas that sacrificed humans in the way depicted. The other inaccuracy has to do with the solar eclipse that seems to surprise everyone, but this is unlikely as the Mayans had excellent astronomical knowledge and very accurate calendars.

However, if you do not see the film, you will be missing out on some touching, some spectacular, some highly entertaining and some poignant parts that make the whole of the film quite enjoyable and overall a positive viewing experience. The cinematography is quite spectacular and the central portion of the film set in the Mayan capital is awe-inspiring in its barbaric splendour. I would have preferred more scenes in this very visually rich and amazingly intricate setting rather than the long chase sequences in the rain forest, however, the film works as it is. The music was not memorable, which I guess can be interpreted as an advantage – it must have not been jarring or obtrusive at the time and complemented the visuals. The acting was excellent and Rudy Youngblood as Jaguar Paw does a remarkable job. The other actors (nearly all completely unknown and draw from the native populations of Mexico and central America) all play well also.

The film’s last scene depicting the arrival of the Spaniards is another historical boo-boo (The peak of the Maya civilisation was between 200-900 AD, and the Spaniards arrived about 600 years later!), but one can forgive Mr Gibson for introducing this as it is a warning to us. Just as the “civilised” tribe terrorized and destroyed Jaguar Paw’s village, the more “civilised” Spaniards would go on to pillage, destroy and massacre all of the pre-Columbian societies they came into contact with in Central and South America. This can be a warning to our present “civilised” society also with its overwhelmingly destructive “globalising” pressures.
Posted by Intelliblog at 01:01