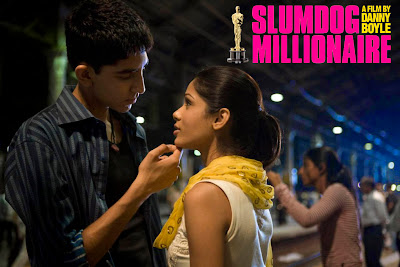 “Never look down on anybody unless you're helping him up.” - Jesse Jackson

I guess it would be remiss of me not to mention the 81st Annual Academy Awards on Movie Monday, even though there were few surprises. Most people had predicted the Best Picture Oscar, as well as Heath Ledger’s posthumous one. Sean Penn and Kate Winslet were also favourites, while Penelope Cruz’s surprise may not have surprised her fans. The big winner, however, was Danny Boyle’s 2008 UK/Indian film “Slumdog Millionaire” (2008).

“Slumdog Millionaire” is the story of Jamal Malik, an 18-year-old boy who grew up in the slums of Mumbai and who suddenly finds himself as a contestant in the Indian version of “Who Wants To Be A Millionaire?”. He astounds everyone with his accurate answers to some tricky questions that bring him close to winning the grand prize of 20 million rupees. When the show breaks for the night, Jamal is arrested under suspicion of cheating in the game as none can believe that this fellow knows the answers to such recondite questions that have stumped richer, more intelligent and more seasoned players than himself. During the police interrogation learn of Jamal’s miserable life, which nevertheless explain why he knows the answers to the questions.

The film is fresh and new in terms of plot, the direction is engaging and immediate, the cinematography dynamic and involving, while the young actors do justice to this piece of excellent cinema. One cannot help but become emotionally involved in a very human story that makes us question our values and priorities, while at the same time entertains and amuses us. The Indian location both enchants and repels, the images and stories displayed awaken within us pity, compassion, admiration, sympathy, good humour, hope and humanity. Jamal’s story is one of poignancy, and the admixture of comedy and drama resembles our every day reality. The film may be a love story, but it is not a cliché. It may be a social commentary but it is not moralistic or didactic. It is confronting and violent, but is easily seen in a family context and well worthy of discussion with one’s children.

The film is aided in its impact by the music score, the cinematography and the seamless direction. It is not often that a “Best Picture” Oscar is also a crowd pleaser as well being a movie that does well in the indie circuit. I guess one can summarise the film by saying it has wide appeal, artistic merit and also is one that can open our heart and mind to lives that before seeing it seemed so very far from our own, but at the film’s conclusion have proven once again to us how close we really are to each other, all of the earth’s children…
Posted by Intelliblog at 01:01