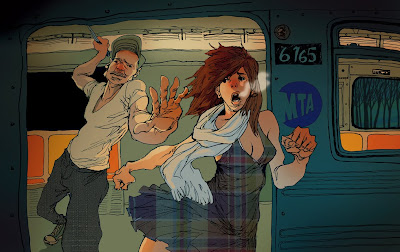 I am no hero. I am the first to admit it and I live by the maxim, “Discretion is the better part of valour”. However, I must say that when the need arises, when circumstances dictate it, I will be courageous, I will speak out, I will stand up for myself or others. It seems that in our days, the situation for this to be tested happens more often than not. We live in times when even if you are meek and mild, even when you obey the laws, even if you take every care to protect yourself, you can still be attacked, robbed, mugged, come to an inch of losing your life, or even in many cases getting murdered, in fact.

Violence has become a fact of life nowadays. We see it on TV everyday, we read about it in newspapers, we are assailed by it in our literature, the internet, the video games our kids play. And unfortunately, how many of us have been victims of it… Perhaps even more disturbing than the violence itself is the syndrome of the “guilty bystander”. Those people that turn a blind eye, those who ignore it, those who allow it to happen without lifting a finger to stop it. Those who walk away from it, not wishing to become involved.

How many of us ignore screams for help? How many of us choose to close our eyes to one of our fellow human beings who is being assaulted? How many of simply shrug our shoulders and say “it’s none of my business”? And thus violence is allowed to proliferate. In such a way we learn to live with it and it increases itself in our existence like a growing cancer.

There was a bashing of an innocent young man on the morning of the 24th February by three cowardly thugs in Sunshine railway station, here in Melbourne. The whole event was captured on CCTV and the pictures are truly sickening. The young man offers no resistance, gives up the bag he carries readily but the criminals keep on kicking and bashing him. A couple walks by and doesn’t stop, says nothing, doesn’t notify the police. The thugs keep on bashing him and finally leave the young man senseless on the ground. This is the society we live in. Violence, apathy, indifference, a cancerous plague of self-perpetuating hate and selfish arrogance.

I should say do NOT watch this video if you are easily shocked or if violence disturbs you, but perhaps then you are the person who should see it first and foremost…

apathy |ˈapəθē| noun
Lack of interest, enthusiasm, or concern: Widespread apathy among students.
ORIGIN early 17th century: from French apathie, via Latin from Greek apatheia, from apathēs ‘without feeling,’ from a- ‘without’ + pathos ‘suffering.’
Posted by Intelliblog at 00:53