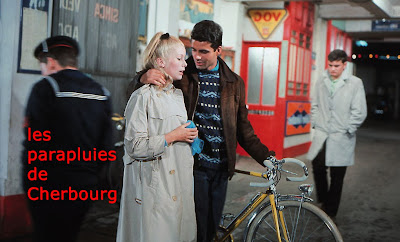 “Love is the poetry of the senses.” - Honoré de Balzac

We watched the 1964 Jacques Demy film “Les Parapluies de Cherbourg” (The Umbrellas of Cherbourg) at the weekend. This was quite a famous and controversial film in its time and even today manages to generate quite few comments. The story is nothing special – trite one could even call it: Geneviève, aged 17 years, lives with her widowed mother, the owner of an umbrella shop in Cherbourg (hence the title of the movie). Geneviève and Guy, a twenty-year-old auto mechanic, are secretly in love and want to marry, but when she reveals this to her mother, her mother objects on the grounds that Geneviève is too young and Guy is not mature or well-established enough, particularly since he has not yet done his compulsory military service. Shortly after this, Guy is conscripted and he is to serve in the war in Algeria.

Before he leaves, Geneviève and Guy spend the night together, which results in her becoming pregnant. While Guy is away they drift apart, and Geneviève, strongly encouraged by her mother, accepts a marriage proposal from a well-to-do gem dealer named Roland Cassard, who has fallen in love with her at first sight and has promised to bring up her child as his own. Geneviève accepts and they get married. Guy returns and finds that his Geneviève, now married, has moved away from town. The rest you’ll have to see for yourselves…

A B-grade melodrama, you might say. Well, yes it is but there is quite difference from your ordinary melodrama. Firstly because it is precisely that, literally a melodrama in its original sense of “sung play”. The whole film is sung, all lines of dialogue uttered in recitative and occasional “aria”. A musical or modern opera, call it what you like, sung it all is. Even “Change the oil in car, Guy!” The film also is beautifully directed and the colours are quite stunning (this after all was the first French musical in colour).

Demy wrote the script and dialogues, as well as directing the film and it was Michel Legrand who imbued the film with its sultry sadness by writing the very atmospheric music for it. Everyone knows the song “I Will Wait for You…” which is melodramatic and romantic to the nth degree. Here it is in context, in the scenes where Guy and Geneviève part when he is conscripted.

The film still surprises and delights, shocks and moves one. The final scene at the Esso station is a legendary one in cinematic history. The acting is superb (and one wonders sometimes how the actors manage to keep a straight face while singing about changing engine oil) and Catherine Deneuve looks beautiful and innocent immersed in the joy and sorrow of first love.

Definitely have a look at this movie, and see what you make of it. It does grow on you and there is much to discover on second viewing.

For Movie Monday, also look at Dangerous Meredith's blog with some really good reviews on three or four movies!
Posted by Intelliblog at 02:02