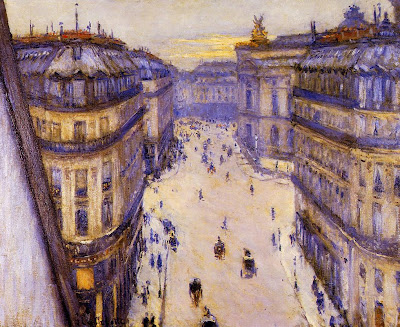 “If you hear a voice within you say ‘you cannot paint’, then by all means paint, and that voice will be silenced.” – Vincent Van Gogh

The illustration for yesterday’s blog is by today’s artist whose work and life I am showcasing for today’s Art Sunday offering. He is Gustave Caillebotte, born August 19th, 1848, died February 21st, 1894. He was a French painter and a generous patron of the impressionists, whose own works, until recently, were neglected. He was an engineer by profession, but also attended the Ècole des Beaux-Arts in Paris. He met Edgar Degas, Claude Monet, and Pierre Auguste Renoir in 1874 and helped organise the first impressionist exhibition in Paris that same year.

He participated in later shows and painted some 500 works in a more realistic style than that of his friends. Caillebotte's most intriguing paintings are those of the broad, new Parisian boulevards. The boulevards were painted from high vantage points and were populated with elegantly clad figures strolling with the expressionless intensity of somnambulists, as in Boulevard Vu d'en Haut (1880; private collection, Paris). Caillebotte's superb collection of impressionist paintings was left to the French government on his death. With considerable reluctance the government accepted part of the collection…

In 1881 Caillebotte acquired a property on the banks of the Seine near Argenteuil, and moved there permanently in 1888. He stopped exhibiting his work at age 34 and devoted himself to gardening and to building and racing yachts. He was able to see his frieds and family at his property, and engaged in lively discussions on art, politics, literature, and philosophy. Although he never married, he had a serious relationship with Charlotte Berthier, a woman eleven years his junior and of the lower class, to whom he left a sizable annuity on his death.

In the early 1890s, Caillebotte stopped painting large canvases because of poor health. He died of pulmonary congestion while working in his garden at Petit-Gennevilliers in 1894 at age 45. After his death, Caillebotte's reputation as a painter was superseded by his reputation as a supporter of the arts, however, seventy years after his death, art historians began to re-evaluate his artistic contributions  and he is now regarded as a significant painter in his own right.

Above is his painting “Rue Halevy Seen from the Sixth Floor”, painted in 1878. It shows a favourite theme of his, an architectural extravaganza of a Paris boulevard, seen from above and with a highly characteristic perspective that is used in many of his paintings. I particularly like the violets and yellows in this painting that are set off by the more neutral creams and greys. It is more impressionistic than some of his other more realistic works, such as the “Paris Street, Rainy Day”, of 1877 that I featured in yesterday’s blog.

Have a good week!
Posted by Intelliblog at 01:35