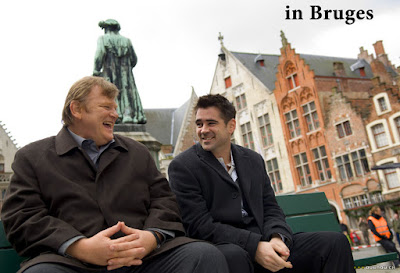 “And so, to the end of history, murder shall breed murder, always in the name of right and honor and peace, until the gods are tired of blood and create a race that can understand.” - George Bernard Shaw

Do vile, abominable, contract killers who are responsible for heinous murders committed in cold blood have feelings? Does someone who is used to destroying life have a conscience? Is there difference between killing an adult and a child? Is there a difference between killing a stranger and an acquaintance? If you are a killer can you have friends? Can a contract killer repent, reform, move on? These are questions that the film we watched at the weekend raised. It was a challenging and difficult film to watch although it was advertised as a comedy. A black comedy, but nevertheless a comedy, and there are a few chuckles in there. However, most of the film I found disturbing and deeply thought-provoking.

It was Martin McDonagh’s 2008 film, “In Bruges”. Firstly, as the title suggests, the locations of the film are absolutely breathtaking. It is all shot in the Belgian city of Bruges (Brugge), the best preserved medieval town in northern Europe with a population of about 200,000. Famous buildings in the city that are showcased in the movie include the old Market Hall (13th–15th century), with a famous 47-bell carillon in the belfry, and the Town Hall (1376–1420). The Chapel of the Holy Blood (14th–16th century), which contains the Chapel of St. Basil (1150) and a gold casket that is reputed to hold a few drops of Christ’s blood brought from the Holy Land in 1150. Other notable churches include the Cathedral of St. Salvator (12th–16th century); the Church of Notre Dame, containing the tombs of Mary of Burgundy and her father, Charles the Bold; and the Church of Jerusalem (1428), a replica of the Church of the Holy Sepulchre. Notable among numerous museums with collections of Flemish art and history are the Memling Museum in the 12th-century Hospital of St. John, the Groeninge Museum, and the 15th-century Gruuthuse mansion. The béguinage (a retreat for secular nuns; 1245) is one of the finest in Belgium (ah, wonderful memories of our visit in Bruges!).

The cinematography is beautiful and shows off the naturally photogenic city in its best light, gruesome plot notwithstanding! This is a characteristic feature of the film – contrasts. Beauty is counterpoised against extreme horror, violence against tenderness, hate against love and affection, conscience against immorality. Yes, there is blood and there is foul language, but this is a movie about killers, remember? There is drug use and horrible murders, people who have no scruples whatsoever, or do they? The result is very complex, challenging and confronting film, which manages despite its subject matter and unlikely characters to draw us in so that we consider the moral questions that I asked at the beginning of the blog.

The plot, very briefly and without giving too much away, concerns two contract killers, Ken and Ray, the former older and very experienced, the other young and just having carried out his first (and very botched!) first job. They are sent by Harry, their boss, to Bruges for a couple of weeks until “things settle down” back home across the channel. Harry, however, has other plans for Ray and charges Ken to carry out his wishes. “The best laid plans of mice and men often go awry” suits what happens next to a tee, and the situation forces Harry to come to Bruges to put things “right”. Things keep on going wrong, very wrong! Add to everything a seductive, local, young woman who is a drug dealer, an ex-boyfriend, some Canadian tourists, a dwarf and the plot thickens quite considerably and comes to a terrifyingly tense climax…

Colin Farrell as Ray does a great job as the antihero torn between an attack of conscience and duty. Brendan Gleeson as Ken is a fine supporting role and Ralph Fiennes is very convincing as the horribly vicious Harry. Clémence Poésy is a fresh-faced beauty who plays the local girl and the dwarf is well-played by Jordan Prentice. The direction is tight and well-handled by Martin McDonagh, who also wrote the script. This was a film that went against convention in many ways, arousing in the viewer conflicting feelings. It was hard to come to terms with feeling sympathy towards contract killers, but the film is after all about redemption so the revulsion one initially, feels turns to pity, turns to sympathy, turns to revulsion in quick succession.

I recommend the film most highly, but be warned, this is a violent and confronting movie. The accents are quite thick and it took us quite a bit of time to get used to them. There were no subtitles or captions on the Bluray disc we watched and we felt quite miffed! Felt short-changed and cheated, in fact! We come to expect the subtitles now and wonder how we did without them for so long in the old days of the VHS tape!
Posted by Intelliblog at 00:41