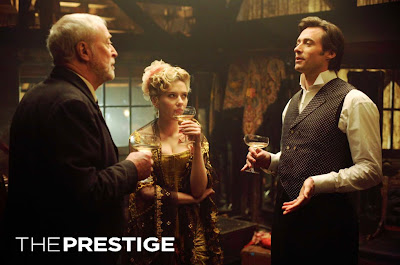 Yesterday we watched an interesting film, which although being quite fluffy (i.e. not deep and meaningful, at least superficially), nor artistically noteworthy it was quite enjoyable as entertainment and a bit of escapism (pun intended, you’ll see what I mean). It was Christopher Nolan’s 2006 film, “The Prestige”. It starred Hugh Jackman, Christian Bale, Michael Caine, Rebecca Hall and Scarlett Johansonn. On the International Movie Database (IMDB) site, the film has a rating of 8.4/100 based on about 175,000 votes, which means a lot of people that have seen it thought it was a pretty good movie. However, I am not always convinced of the merit of the ratings on IMDB. They can be skewed quite considerably in favour of the people that use the site and may not necessarily represent a good cross-section of the movie-viewing public. Nevertheless, as I said earlier, the movie was enjoyable and good enough to watch as a bit of escapist fare for a Sunday matinee.

The plot revolves around a pair of magicians in 19th century London. Hugh Jackman plays Robert Angier (magician #1) and Christian Bale plays Alfred Borden (Magician #2). These two start out as good friends but end as bitter enemies with each bent of revenge in the wake of a botched stage act that goes tragically wrong. Both magicians become famous and as their rivalry grows, each sabotages the performance of the other on stage. When Alfred performs a successful trick, Robert becomes obsessed trying to uncover the secret of his competitor. They are aided by their ingénieurs (masters of the devices and devisers of the mechanics of the tricks). There is a particularly good performance by Michael Caine, as Cutter, Angier’s ingénieur. In search of the ultimate trick, Robert goes to the USA, finds Nikola Tesla, the famous physicist (played with great aplomb by David Bowie!) and gets him to construct an amazing electrical device that helps him create the magic trick that astounds all of London…

The film examines the duality of human nature and the triggers that force a human being to go from good to bad, from loving to hating, from helping to hindering. It asks the question is even a saintly person likely to turn to an evil one given a powerful enough trigger? It posits that most of us enclose within both the good and the bad balanced precariously. It is a constant struggle to maintain the balance weighed down on the good side. The movie looks at what pushes that balance towards the bad side.

The cinematography, costumes and sets are successfully Victorian and the atmosphere that is created is one of authenticity. One has a good insight into end-of-the-century Vaudeville and the cut-throat competitiveness that existed then. The direction is very good and the music is quite suitable and appropriately unobtrusive. Although the film is 130 minutes long, it is not tiring. A word of warning: There are some challenging scenes, which the faint-hearted may find disturbing (people drowning, canaries being violently killed…).

The film reminded me of a clutch of other films that have to do with magicians. For example, “Houdini” the 1953 classic with Tony Curtis. The 2007 “Death-Defying Acts” with Guy Pearce and Catherine-Zeta Jones; and the very satisfying 2006 film “The Illusionist” with Edward Norton.

Quite a good movie to watch and unwind with.
Posted by Intelliblog at 22:02