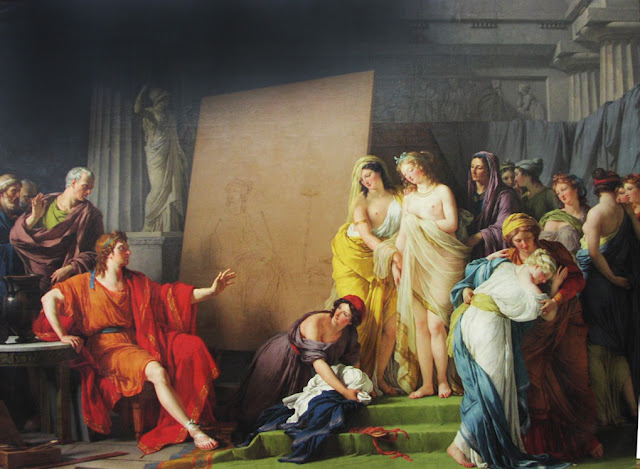 “Painting is easy when you don't know how, but very difficult when you do.” - Edgar Degas

For Art Sunday today and artist of whom we know little and none of whose paintings have survived. It is the ancient Greek painter of the 5th century BC, Zeuxis. In ancient records we are told that Zeuxis, following the initiative of Apollodorus, had introduced into the art of painting a method of representing his figures in light and shadow, as opposed to the older method of outline, with large flat masses of colour for draperies, and other details, such as had been practised by Polygnotus and others of the great fresco painters. The new method led to smaller compositions, and often to pictures consisting of only a single figure, on which it was easier for the painter to demonstrate the perfect roundness of form of the painted figure.

The effect would appear strongly realistic, as compared with the older method of flat colour, and to this was probably due the origin of such stories as the contest in which Zeuxis painted a bunch of grapes appearing so real that birds flew towards it, while Parrhasius painted a curtain which even Zeuxis mistook for real. It is perhaps a variation of this story when we are told that Zeuxis also painted a boy holding grapes towards which birds flew, the artist remarking that if the boy had been as well painted as the grapes the birds would have kept at a distance.

Lucian, in his “Zeuxis”, speaks of the artist as carrying a search of not only to novelty of technique, but also to a novel and strange degree as in subject matter and the emotional reaction this subject had on the viewer, as illustrated in the group of a female Centaur with her young. When the picture was exhibited, the spectators admired its novelty of theme and overlooked the skill of the painter, to the vexation of Zeuxis. The pictures of Heracles strangling the serpents to the astonishment of his father and mother, Penelope, and Menelaus Weeping are quoted as instances in which strong themes naturally presented themselves to the artist. But, in spite of the tendency towards realism inherent in the new method of Zeuxis, he is said to have retained the idealism, which had characterized his predecessors.

Of all his known works it would be expected that this quality would have appeared best in his famous picture of Helen of Troy. Quintilian states that in respect of robustness of types Zeuxis had followed Homer, while there is the fact that he had inscribed two verses of the Iliad under his figure of Helen. As models for the picture he was allowed the presence of five of the most beautiful maidens of Croton at his own request, in order that he might be able to "transfer the truth of life to a mute image." Cicero assumed that Zeuxis had found distributed among these five women the various perfect elements that went to make up a figure of ideal beauty. It should not, however, be understood that the painter had made up his figure by the process of combining the good points of various models, but rather that he found among those models the points that answered to the ideal Helen in his own mind, and that he merely required the models to guide and correct himself by during the process of transferring his ideal to form and colour. This picture also is said to have been exhibited publicly, with the result that Zeuxis made much profit out of it.

Zeuxis is said to have laughed to death at one of his own paintings. It was the painting of an old maid who had requested to pose for him in order that he might paint a picture of Aphrodite, the goddess of beauty and love.

The painting above “Zeuxis et les Filles de Crotone” is by François-André Vincent (1746-1816), painted in 1749 and exhibited in the Louvre. It illustrates Zeuxis choosing the five beautiful young women of Croton, who he will use as his models on which to base his painting of Helen. The painting is full of a neo-classicism, full of charm but at the same time replete with archaeologically correct detail, reminiscent of David.
Posted by Intelliblog at 00:52