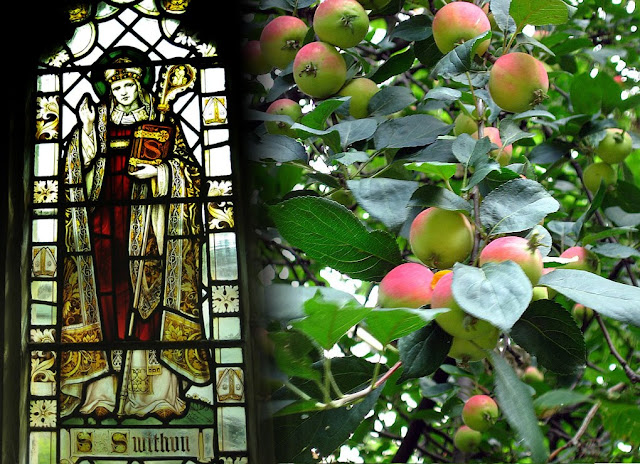 “Sunshine is delicious, rain is refreshing, wind braces us up, snow is exhilarating; there is really no such thing as bad weather, only different kinds of good weather.” - John Ruskin

The last few days at work have been a whirlwind. I have been doing ten million things at once, have had meetings, working on submissions that are due to be lodged, entertaining interstate visitors, making preparations for a staff workshop next week, dealing with network outages, attending to several crises and numerous troubleshooting interventions. I didn’t have time to have lunch yesterday and even going in at 7:00 a.m. and leaving at 6:00 p.m isn’t enough to deal with the work that is accumulating. I have brought home some work to be done at the weekend, but I am too tired to work in the evening. I think that 11 and 12-hour work days are long enough. I certainly hope that by the end of the month the workload will ease…

Today is St Swithin’s Day in the Anglican calendar. St Swithin was a Saxon bishop of Winchester, well-beloved of his flock, who is believed to have died in 862 AD.  As his last wish before he died, he stipulated to be buried in the common churchyard amongst his poor parishioners.  His wish was granted, but so many miracles occurred at his grave that monks moved his remains to a magnificent shrine in Winchester Cathedral.  The Saint wept in protest causing a downpour that lasted for forty days:

In Buckingamshire the following variant of the weather oracle exists:

If on St Swithin’s day it really pours
You’re better off to stay indoors.

However, it was also believed in some parts of Britain that rain on St Swithin’s Day “christened” the apples which still should be unpicked on the trees.  No apples should be picked before St Swithin’s blessing is bestowed upon them; only then are they to ripen fully and reach their maturity. St Swithin is invoked in droughts, when it is thought that his intercession will bring about rain.

oracle |ˈôrəkəl| noun
1 A priest or priestess acting as a medium through whom advice or prophecy was sought from the gods in classical antiquity.
• A place at which such advice or prophecy was sought.
• A person or thing regarded as an infallible authority or guide on something : Casting the attorney general as the oracle for and guardian of the public interest is simply impossible.
2 a response or message given by an oracle, typically one that is ambiguous or obscure.
ORIGIN: late Middle English : via Old French from Latin oraculum, from orare ‘speak.’
Posted by Intelliblog at 01:58