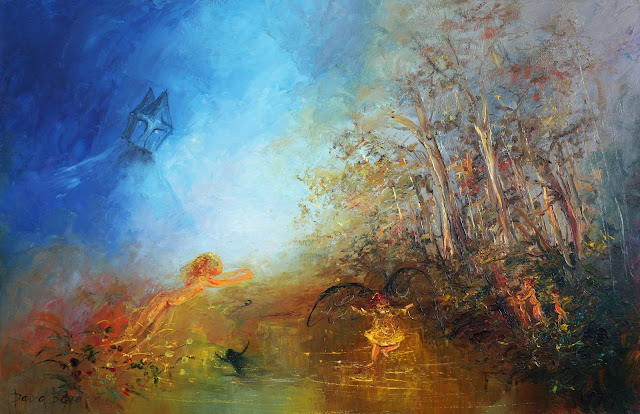 “Pictures must not be too picturesque.” - Ralph Waldo Emerson

The art of Australian David Boyd for this Art Sunday. He was born the third and youngest son of artists Merric and Doris Boyd in Melbourne in 1924 and studied pottery and painting within the artistic Boyd family, which was an extended and multi-talented one. In 1948, he married Hermia Lloyd-Jones, daughter of graphic artist Herman (Jonah) and Erica Lloyd-Jones. Together they introduced a new wave of Australian pottery, inventing new glazes and novel methods of shaping sculptural figures. Their three daughters also became potters.

Initially acclaimed as a potter, Boyd began his career as a painter in 1957 with a series of paintings on Australian explorers. His paintings ignited controversy as he depicted aborigines as gentle, frightened people not wanting to be deprived of their homeland. Boyd remained unmoved and he continued to provoke with unpopular ideas. As a humanist, his paintings are full of social comment, as befits a moral painter. He said: “I often think of myself as being a spiritual anarchist.” Several major series of paintings demonstrate his highly dramatic style with the juxtaposition of innocence and evil. For example, the “Trial”, the “Tasmanian Aborigines”, the “Wanderer” and the “Exiles”.

He was also an accomplished pianist, having studied at the Melba Memorial Conservatorium of Music. David Boyd worked and travelled in Europe and the UK, winning international recognition, and on his return in the 70s, produced some of his most approachable work, combining angels, aborigines and children dancing through his often depicted and much loved bush. The work above, "Winged Child Dancing" (1974)  is an example of these sorts of paintings.

He became Chairman of the Contemporary Arts Society of Australia and for the next 20 years travelled and exhibited overseas and at home to world acclaim.
Posted by Intelliblog at 00:25