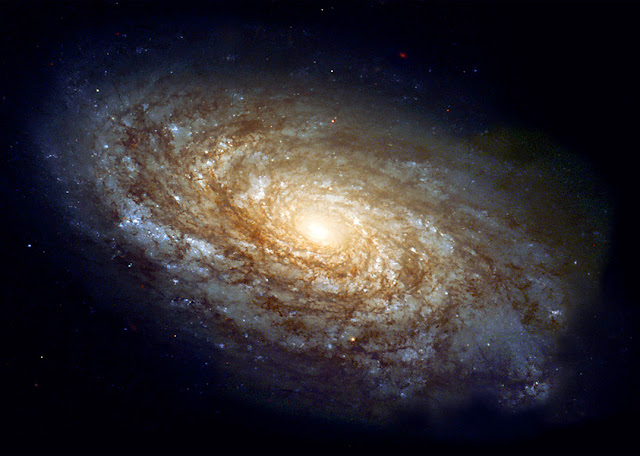 "The Sun, with all the planets revolving around it, and depending on it, can still ripen a bunch of grapes as though it had nothing else in the Universe to do." - Galileo Galilei
It is another day when I cast my eyes heavenwards in wonder and awe, as news of yet one more discovery of cosmic proportions is publicised by the press. Australian scientists from Swinburne University have discovered a type of galaxy that was long thought to be “extinct”. This discovery has caused a great deal of excitement in astronomical circles as the find has forced cosmologist to re-examine their theories about new star formation.
These new galaxy types look just like our own Milky Way galaxy (a twirling spiral disc-like structure), however each one such galaxy appears to be forming about 100 new stars a year compared to the one new star per year formed by galaxies such as our own. The newly discovered galaxies have been demonstrated to be more turbulent than the Milky Way and they are about a billion light years way from Earth. Such galaxies that are “star nurseries” were very common about three billion years after the Big Bang but this is the first time they have been observed in “today’s” universe. I put “today” in inverted commas as the currently observed galactic events occurred one billion years in the past, as the objects observed are so distant that it has taken light so long to reach us. Nevertheless, they are considered recent for the 14 billion-year-old universe.
The way stars form is when large clouds of gas collapse under their own gravitational attraction and the popular theory suggested that large streams of interstellar gas fell into the primitive star from outside. The question that was immediately asked in regard to these star-forming galaxies that have just been observed was where is the gas coming from to form these new stars? In the “modern” universe we expect large masses of primordial interstellar gas to be available any more. The source of the gas has to be discovered still…
galaxy |ˈgaləksē| noun ( pl. -axies)
A system of millions or billions of stars, together with gas and dust, held together by gravitational attraction.
• (the Galaxy) The galaxy of which the solar system is a part; the Milky Way.
• figurative a large or impressive group of people or things: A galaxy of boundless young talent.
The Galaxy in which the earth is located is a disk-shaped spiral galaxy with approximately 100,000 million stars. The sun is located about two thirds of the way out from the center.
ORIGIN late Middle English (originally referring to the Milky Way): via Old French from medieval Latin galaxia, from Greek galaxias (kuklos) ‘milky (vault),’ from gala, galakt- ‘milk.’
The reference to milk is from the Greek myth whereby Hera/Juno, the queen of the gods and wife of Zeus, was tricked by her husband Zeus/Jupiter into breast feeding his illicit son Heracles/Hercules as a baby while she was asleep in order to give Hercules immortality. When Hera awoke and realised who the baby was; the illicit son of her husband; she immediately tore him from her breast causing a smear of milky droplets across the sky which the Milky Way. As a result Heracles became a semi-immortal hero. In Greek Heracles, is derived from Hera’s name, and means the “glory of Hera”. However, after Hercules completed his twelve labours and after his death he became immortal. Hera was then reconciled with him and allowed him to marry her daughter, Hebe, the goddess of youth.
Posted by Intelliblog at 00:53