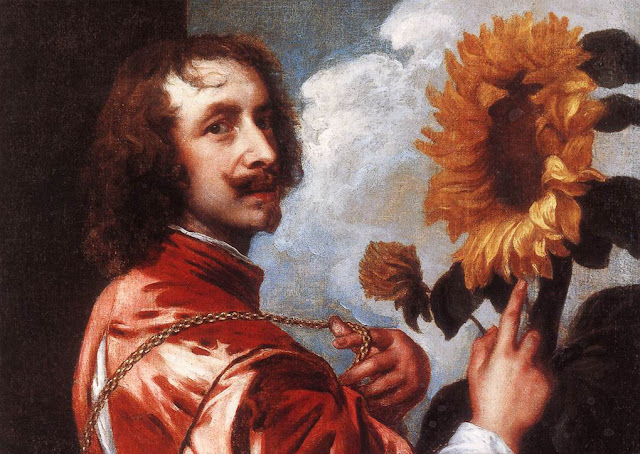 For today’s Art Sunday,  Anthony van Dyck (1599-1641), one of the most famous Flemish painters of the 17th century. He was one of Rubens’s many well-known pupils and assistants and he soon acquired all the virtuosity of Rubens in rendering the texture and surface of things, whether it were silk or human flesh. Nevertheless, van Dyck differed much from his master in temperament and mood.

Van Dyck was not a healthy man, something apparent perhaps in his paintings where a languid and slightly melancholic mood often prevails. It may have been this quality that appealed to the austere noblemen of Genoa and to the cavaliers of Charles I’s entourage. In 1632 he had become the Court Painter of Charles I, and his name was Anglicised into Sir Anthony Vandyke.

We owe him the artistic record of this society with its aristocratic bearing and its cult of courtly refinement. His portrait of Charles I, just dismounted from his horse on a hunting expedition, showed the Stuart monarch as he would have wished to live in history: A figure of matchless elegance, of unquestioned authority and high culture, the patron of the arts, and the upholder of the divine right of kings, a man who needed no outward trappings of power to enhance his natural dignity. No wonder that a painter who could bring out these qualities in his portraits with such perfection was so eagerly sought after by society.

Van Dyck was so overburdened with commissions for portraits that he, like his master Rubens, was unable to cope with them all himself. He had a number of assistants, who painted the costumes of his sitters arranged on dummies, and he did not always paint even the whole of the head. Some of these portraits are uncomfortably near the flattering fashion-dummies of later periods, and it seems that van Dyck established a dangerous precedent, which did much harm to portrait painting. But all this cannot detract from the greatness of his best portraits. Nor should it make us forget that it was he, more than anyone else, who helped to crystallise the ideals of blue-blooded nobility and gentlemanly ease which enrich our vision of man no less than do Rubens’s robust and sturdy figures of over-brimming life.

His “Self-Portrait” (1633; 58.4 x 73 cm) here shows us the artist holding a glorious sunflower. When he painted this, Van Dyck was the court artist to King Charles I. In 1633 Charles gave him a gold chain and a medal to honour the artist’s role as His Majesty’s “Principal Painter”. The significance of the gold chain cannot be overlooked as Van Dyck lifts it towards the viewer. He also draws our attention towards the sunflower by pointing to it. The sunflower was often used to symbolise the relationship between the king and his subject - just as the flowerhead turns towards the sun for life and light so the subject should turn to the monarch.
Posted by Intelliblog at 01:48