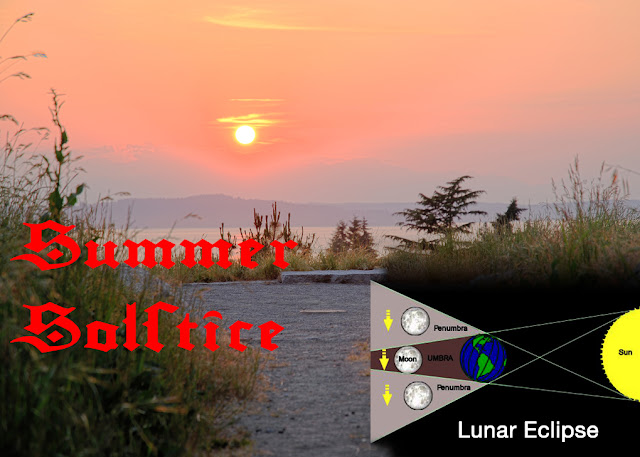 “No known roof is as beautiful as the skies above.” - Mícheál Ó Muircheartaigh

The reason for the different seasons at opposite times of the year in the two hemispheres is that while the earth rotates about the sun, it also spins on its axis, which is tilted some 23.5 degrees towards the plane of its rotation. Because of this tilt, the Northern Hemisphere receives less direct sunlight (creating winter) while the Southern Hemisphere receives more direct sunlight (creating summer). As the Earth continues its orbit the hemisphere that is angled closest to the sun changes and the seasons are reversed.

As a major celestial event, the Summer Solstice results in the longest day and the shortest night of the year. Civilisations from ancient times have been awed by the great power of the sun, and thus celebrated the first day of summer otherwise known as Midsummer (or the Wiccan Litha). The Celts & Slavs celebrated the first day of summer with dancing and bonfires to help increase the sun’s energy. The Chinese marked the day by honoring Li, the Chinese Goddess of Light.

Perhaps the most enduring modern ties with Summer Solstice were the Druids’ celebration of the day as the “wedding of Heaven and Earth”, resulting in the present day belief of a “lucky” wedding in June (I wonder if it holds true for December weddings in the Southern Hemisphere?). Pagan spirit gatherings or festivals are also common in June, when groups assemble to light a sacred fire, and stay up all night to welcome the dawn.

To add further to the astronomical goings-on today, a total eclipse of the moon will occur. This happens when the earth comes between the sun and the moon, so that the “shadow” of the earth falls on the full moon. The moon assumes a coppery red colour and the eclipse lasts much longer than solar eclipses. I just hope that we don’t get much cloud cover tonight. The sky has been overcast for most days in the past few weeks and even if it’s not raining, we are looking at a grey sky for most of the time…
Posted by Intelliblog at 21:12