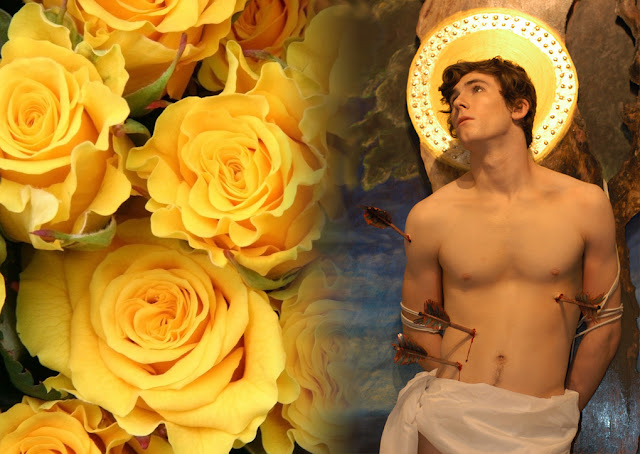 “The archer shall not put him to flight, the stones of the sling are to him like stubble.” - Job 41:28; Old Testament

Today is St Sebastian’s Feast Day according to Roman Catholic heortology. Greek Orthodox Christians commemorate this saint on the 18th December. Remarkably little is known of St Sebastian’s life but his cult adoration was well entrenched by the 5th century AD. He is the patron saint of athletes, the patron saint of archers, and also a protector from the plague. The symbolology of archery and arrows as a protection from the plague hark back to Greek mythology, with Apollo destroying pestilence with his arrows.

St Sebastian was born in France of Italian parents in the 3rd century AD, dying about 288 AD. So as to help his fellow Christians who were dying as martyrs he went to Rome and enlisted as an officer, becoming a great favourite of the emperor Diocletian (244 –311 AD). He converted many to Christianity until he was betrayed to the emperor by a false friend. Diocletian tried to make him change his faith but Sebastian was not to be shaken. The emperor ordered his archers to execute the Saint. Although every part of his body was pierced by arrows and the soldiers left him for dead, Sebastian was alive. A kindly widow, Irene, nursed him back to health and Sebastian went back to the emperor, urging him to stop his persecution of the Christians. Diocletian was intransigent and ordered a new martyrdom for Sebastian. The Saint was clubbed to death in the amphitheatre (hence the connection with athletes).

St Sebastian was buried in the Roman catacombs, but his remains were transferred to a church in the 4th Century. The remains asserted to be those of Sebastian are currently housed in Rome in the Basilica Apostolorum, built by Pope Damasus I in 367 AD on the site of the provisional tomb of St Peter and St Paul. The church, today called San Sebastiano fuori le mura, was rebuilt in the 1610s under the patronage of Scipione Borghese.

St Sebastian is a great favourite of artists, depicted in numerous artworks, especially paintings. He is usually shown as a handsome young man who is being martyred by having arrows shot at him. The connection with the Greek god Apollo is an obvious one and may explain why the saint became so popular, his cult being a surrogate one for the cult of Apollo,  the archer sun god and the curer of pestilence.

A yellow rose, Rosa spp, is today’s birthday flower. It symbolises jealousy and infidelity.  In the language of flowers a yellow rose means: “Let us forget” and may be symbolic of dying love, especially if it is given full-blown.  A rose thorn is symbolic of sin, death and pain.  In the last few decades, the yellow rose has lost some of its old negative meaning and is now more associated with the positive symbolism of happiness, return to the good times and joy about to be fulfilled.

Today is also St Agnes’s Eve. On this eve, young women took their shoes, put a sprig of rosemary in one, a sprig of thyme in the other, sprinkled them with water, placed them one on each side of their bed and said:
St Agnes, that’s to lovers kind,
Come ease the trouble of my mind.
They would then dream of their future husband.

The word for the day is:

Heortology |hēôrˈtôl əjē| (noun)
• A term used to denote the study of religious festivals. The term was originally only used in respect of Christian festivals, but it now covers all religions, in particular those of Ancient Greece.
DERIVATIVES: Heortological (adjective)
ORIGIN: From Greek, from heorté, ‘festival, holiday’ and -logia, ‘discourse’.
Posted by Intelliblog at 21:02