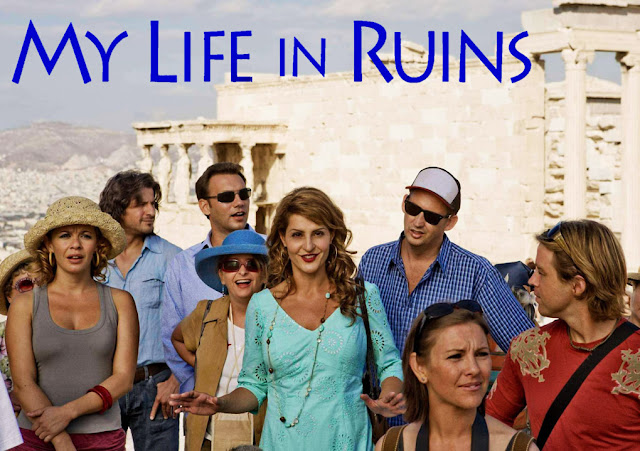 “Let the credulous and the vulgar continue to believe that all mental woes can be cured by a daily application of old Greek myths to their private parts.” - Vladimir Nabokov

We recently watched the 2009 Donald Petrie move “My Life in Ruins”. This was the film that Nia Vardalos made on the wake of her widely successful “My Big Fat Greek Wedding” of 2002 and the 2004 “Connie and Carla”. This latest offering has Nia Vardalos only act (rather than write as well as act), and the screenplay in “My Life in Ruins” is by Mike Reiss. This was a bad move as the script is pure bathos and full of Hollywood clichés, chock full of cardboard cutout characters, predictable plotline and some stereotypical Greek jokes about the place, people and Greek “national traits”.

Nia Vardalos plays Georgia, an American academic in Athens, who has lost her university job. To tide herself over she has begun working as a tour guide, a job she dislikes as she wants the tourists to be as interested in Ancient Greek history, art and culture as she is. The (mainly American - but also Brit, Aussie, Spanish and Canadian) tourists are bored with history and they just want to shop and have a good time. The film takes us on a tour of Greek sites with a tourist group that has a shallow couple, a frat boy, an insufferable teen, a feuding couple, divorcées looking for a man, an Ocker couple, an uppity British family, some grey Canadians and a “funny guy”. There is also a sullen, bearded Greek coach driver in a bus without air conditioning and a competing tour guide who wants to scuttle Georgia’s chances of succeeding in her job for his own selfish reasons. Georgia’s journey becomes an odyssey but as one would expect in this extremely lightweight and barely amusing romp all will end well for everyone…

The “tall, dark and handsome” Greek bus driver is played by Alexis Georgoulis, an actor who has played in several Greek TV series and the odd movie. He looks distinctly uncomfortable in this film, with his character’s name (“Poupi Kakas”) being one of the objectionable scatological attempts at joking in the script. Richard Dreyfuss is another uncomfortable actor in the film, playing one of the American tourists. The only good choice I found was Alistair McGowan, the British actor who is quite successfully cast as the slimy, deceitful and conniving Nico, the competing Greek (sic!) tour guide.

This film is mildly amusing to boring (perhaps offensive, if you are a purist Greek) and unfortunately a waste of Ms Vardalos’ talent, who perhaps should have written the screen play herself and made a better job of it. The film had so much potential but it was really neither very funny nor terribly romantic. Some of the scenery is quite breathtaking (although the continuity is skewed!) and the terrible cast is always blocking the view of beautiful Greece! The idea behind the movie’s plot must have come from the less objectionable: “If It's Tuesday, This Must Be Belgium”, but lacks its charm and relatively good script.

Georgia as played by Vardalos is a self-deprecating parody of  Toula in “My Big Fat Greek Wedding” and unfortunately she ends up being rather lacklustre and boring in this film. Her transformation in the end is unbelievable and hampered by the weakness of the plot. The tourists are a corny, one-dimensional lot that consistently ham it up and end up being extremely tedious. Richard Dreyfuss was frankly quite annoying (I don’t like him much as an actor in any case). There is also some New Age nonsense interspersed with cheap philosophy and attempts at poignancy that are like an elephant in a tutu trying to dance en pointe.

I don’t recommend this movie at all, unless you are stuck for something to watch and it must be this. In this case, sneak a peek at some nice Greek scenery and try having an occasional titter at the ridiculous goings-on, on screen. Don’t expect wit, don’t expect originality, don’t expect good acting and don’t expect a good plot or believable characters!
Posted by Intelliblog at 21:36