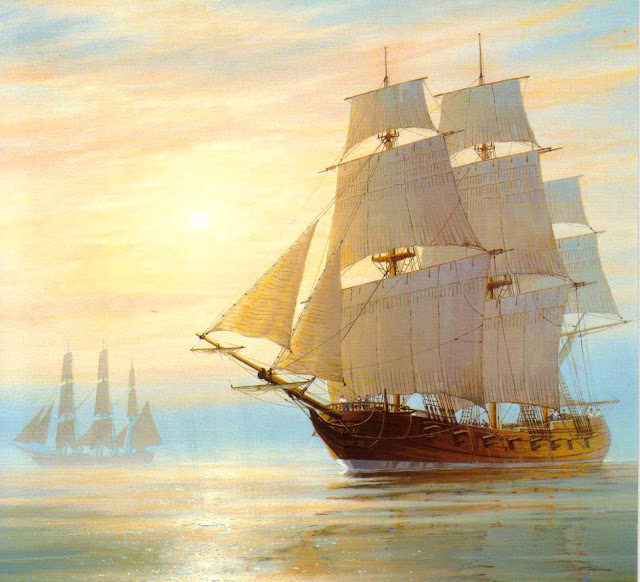 “I find myself at the extremity of a long beach.  How gladly does the spirit leap forth, and suddenly enlarge its sense of being to the full extent of the broad, blue, sunny deep! A greeting and a homage to the Sea! I descend over its margin, and dip my hand into the wave that meets me, and bathe my brow. That far-resounding roar is the Ocean's voice of welcome. His salt breath brings a blessing along with it.” - Nathaniel Hawthorne

We went to Port Melbourne and then to St Kilda today, which are always good places to take visitors. St Kilda was very busy, as always, with the Sunday Market in full swing, the Luna Park open, lots of sailing boats in the sea and people, people, people everywhere… We all enjoyed the day even though the weather was coolish. At least it was fine!

A painting by English artist Roger Desoutter (born 1923), who has been a regular exhibitor at The Royal Society of Marine Artists. Many of his works have been reproduced as cards and Fine Art prints. Adrian Vincent in 100 Years of Traditional British Painting, says: “He particularly enjoys depicting the areas around estuaries and coastal inlets; tranquil scenes painted at sunset or in the early morning, showing expanses of wet sand reflecting light, often with beached boats waiting for the tide.” Two of Desoutter’s paintings are illustrated in 20th Century British Marine Painting, and his paintings regularly sell in the middle four figures.

This painting of his of the "USS Rattlesnake" is typical of his oeuvre, with the sailing ship in morning light and the pastel shades of sea and sky creating a romantic, almost fantasy-like backdrop. A very nostalgic view of the sailing ship days of yore...
Posted by Intelliblog at 01:59