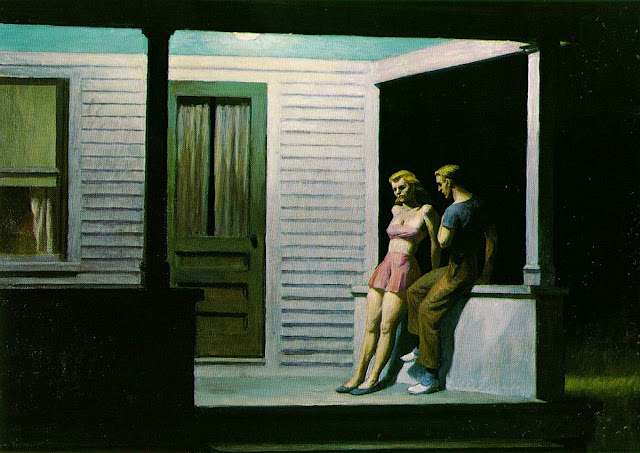 “Who would give a law to lovers? Love is unto itself a higher law.” – Boethius

The creative writing group hosted by Magpie Tales has set a challenge based on the image above, which is Edward Hopper’s “Summer Evening, 1947”. Edward Hopper is one of the USA’s best-loved artists. Hopper was born in Nyack, New York, in 1882. He studied at the New York School of Illustrating, and at the more prestigious New York School of Art. Here he studied under American realist Robert Henri. After his studies at the NY School of Art, Edward Hopper went on to study in Paris. This was 1906, at a key time in the development of modern art. It took a long time for Hopper to experience commercial success. He struggled for years, surviving as an illustrator. His first success as a painter came in 1924 when he sold out a show at the Rehn Gallery in New York. This is the year he painted “The House by the Railroad”, one of his most famous works. He died in 1967, his studio near Washington Square in New York City, having achieved recognition and great financial success.

In this painting a young couple in summer dress are conversing on a porch under the harsh artificial light of an incandescent bulb. There is tension in the scene and despite the fairly neutral body language what is being discussed looks as though it is not too pleasant. The image is unsettling with its grouping of figures on the right against the darkness of the late night and the bright light with its stern shadows. The house looks dark and deserted and the drawn curtains on the door are somehow forbidding, even though the window is less hostile. My first impression when I first saw the painting was: “They’re breaking up”. The second thought was: “She’s pregnant and he won’t like it when he hears it…” Yet another thought in quick succession was more optimistic: “He’s about to propose. Casually, perhaps, but that’s the way they are…”

The poem below goes with none of these first thoughts.

“I can’t, I really can’t, I tell you,”
He says quietly yet with great feeling.
She’s insulted, and looks away sullenly –
A woman scorned has a hellish disposition.

“You mean you don’t like me, don’t you?”
Her voice cold, her eyes, sharp cut glass.
“You never said you didn’t like me…”
She’s angry, but stares vacuously, controlling it.

“No, heck, no! I do like you, but…”
He stammers, blushes and his words stick
Deep in his throat, his breath shallow,
While his hands fidget ineptly.

“It’s Debbie, isn’t it?” She asks.
“I know it’s her, I’ve seen you two,
Laughing, whispering, you two, together.”
Her ire white-hot, warming even more the summer air.

“Patty, please, no it’s not what you think…”
His eyes are downcast, his feet shift uneasily,
He half sits on the balustrade, his left hand raised
To quieten his racing heart, an ineffectual gesture.

“Don’t lie to me, I hate liars, you know I do.”
She straightens her arms, behind her,
And her breasts jut out, provocatively.
“I am not pretty enough, not good enough…”

“Oh shucks, no! You’re beautiful, Patty,
You know you are, and Debbie and I are just friends,”
His eyes are moist and pleading now,
“You know that I’m not lying!”

“You’re hiding the truth and that’s worse.”
She says and looks down sourly.
“You’re a pretender, that’s who you are,
A teller of stories and a deceiver…”

He lowers his eyes and wipes a tear.
“You don’t know, you don’t understand.”
He looks away and manages to stammer:
“Patty, your brother Joe and I, we two, we’re…”

But the words are glutinous and stick to his tongue;
He looks at her terrified and with a quick movement
Runs away, disappearing into the night,
Leaving her bewildered, frozen in the ice of his refusal.