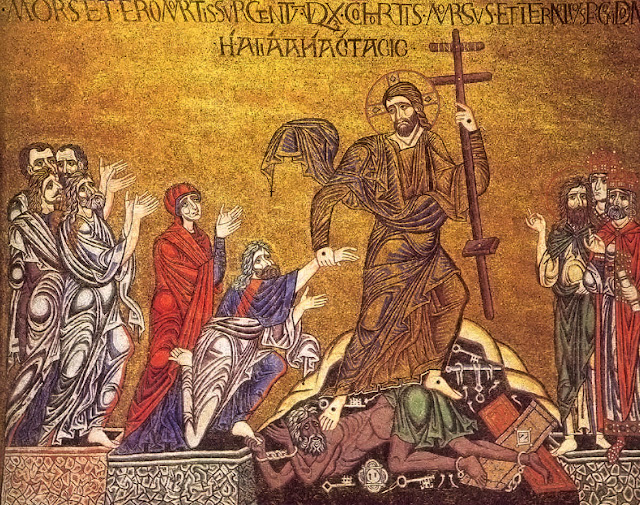 “Our Lord has written the promise of resurrection, not in books alone, but in every leaf in springtime.” - Martin Luther

Today Orthodox Easter is celebrated. The term Easter commemorates the feast of the pagan Anglo-Saxon goddess Eostra, the goddess of the dawn. Her sacred animal was a hare.  This may have been the origin of the “Easter Bunny”.   In the Christian tradition Easter is one of the most important holidays of the year, the Orthodox faith in particular assigning to it the most importance amongst the Feast Days.  It is a commemoration of the Resurrection of Christ, which took place during the Jewish Passover, the Pesach.  The Greek and Latin terms for Easter, Pascha, are derived from the Jewish term.  The adjective “Paschal” is used in English, relating often to the “Paschal Lamb” and the “Paschal Candles”.

Herrings, herrings white and red
Ten a penny, Lent is dead.
Rise Dame and give an Egg
Or else a piece of bacon.
One for Peter one for Paul
Three for Jack-a-Lent’s all:
Away, Lent, away!

A tradition in many countries (including Greece) is the wearing of some new article of clothing on Easter Day.  If this is not carried out, bad luck will be yours all year.  The wearing of a new Easter Bonnet to church is linked to this tradition.  Incidentally, any new item of clothing should first be worn to church.  Whenever that article of clothing that was first worn on Easter Day is worn again, the wearer will experience good luck.
At Easter let your clothes be new
Or else be sure you will it rue.

Greek Easter is celebrated joyously, beginning with the evening liturgy, which extends well into h morning hours and the most joyous part being the resurrection, which is announced on the stroke of midnight. The faithful light their candles as the priest chants the good news:

Christ is risen from dead,
On death treading victorious,
And to those in the grave
Giving the gift of life.

Many Orthodox Christians in Australia celebrate Easter (Pascha) according to the Easter date in the Julian calendar, usually later than the Western Church Easter, which is calculated according to the Gregorian calendar. Easter is the most important event in the Orthodox church calendar. As most Orthodox Christians in Australia fast during Lent prior to Easter, Easter Sunday is a time for families and friends to get together for a festive meal, where meat and dairy products can be eaten again. Lamb and tsourekia (or tsoureki), which is a type of Easter bread, are popular Easter dishes in many Greek Orthodox communities in Australia. Many people leave the city and go in the countryside to celebrate Easter and spit roast the lamb over an open bed of charcoal.

In the afternoon, the “Agápee Liturgy” is celebrated, which is dedicated to loving our neighbor and forgiving wrongs that people ay have done one. The congregation at the conclusion of this liturgy shake hands and exchange symbolic kisses, denoting forgiveness and reflecting divine love.

The mosaic above is a detail of the “Anastasis” (Resurrection), from the west vault of Cathedral of St. Mark, Venice, ca 1180 AD.