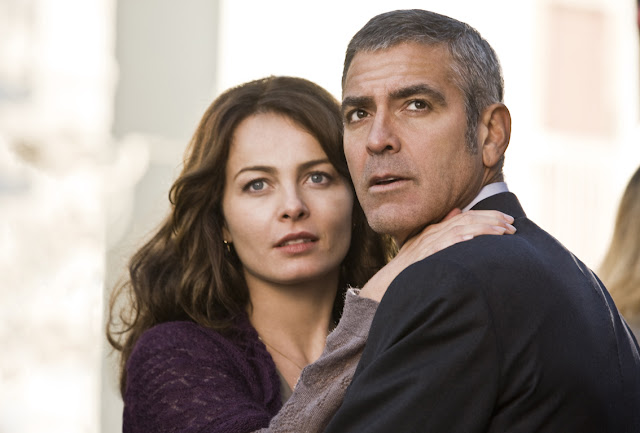 “The pleasure of expecting enjoyment is often greater than that of obtaining it, and the completion of almost every wish is found a disappointment” - Samuel Johnson

We watched a rather disappointing film with George Clooney at the weekend. It was Anton Corbijn’s 2010 film “The American”, starring George Clooney, Paolo Bonacelli, Thekla Reuten and Violante Placido. I must say that a few films with George Clooney that we have seen lately have been lemons (who can forget the super lemon “The Men Who Stare At Goats” or the other super lemon “Syriana”?). This last film we watched was a mini lemon, suffering from a pedestrian script and a self-important, “we-are-making-a-serious-art-film-here-and-don’t-you-forget-it” type of attitude.

The plot was simple enough (and that was part of the problem): Jack (Clooney) is an assassin, a hitman, a murderer, but also a master craftsman who can modify guns to specification. He is an American who is working in Europe. A job in Sweden ends more messily than expected and he tells his contact, Pavel, that his next assignment will be his last. Jack goes to the Italian countryside, where he takes up residence in a small apartment in a small rural town posing as a landscape photographer. The assignment, as specified by a Belgian woman, Mathilde (Reuten), involves a gun being modified to specification. Jack is befriended by the local priest Father Benedetto (Bonacelli) and pursues romance with local hooker, Clara (Placido). However, things begin to sour when double crossing enters the equation.

First let me say that everyone acted well, there is no arguing with that. Second, the countryside and Italian townscapes provide for plenty of opportunity for good cinematography. The sound track is appropriate and the production values high. That summarises the good things about the movie. Now as for the bad, where do I start? At 105 minutes run time the film feels like it’s at least three hours long. Although it is described as an action thriller, this is a slooooow film, ostensibly about the feelings and moral dilemmas that a contract killer has. The script is laughable and the pretence of the basic idea makes this film tedious. There is a lot of gratuitous nudity and sex in the film, not necessarily relevant to the plot – I guess that was to make it more saleable? Really, nowadays? There were plot holes and the movie failed to engage the viewer. As if all that wasn’t bad enough, we are expected to feel sorry for Jack the contract murderer.

In the end, all we could muster was: “Oh? Is that all? Ho hum!” The film could have been made more exciting, more action-packed and the characters more engaging. I could not work up enough sympathy for poor old George and in the end could not help thinking he got what he deserved – he was a killer after all. His redemption was half-hearted and unconvincing. It was a boring film and too steeped in its own inflated self-importance. There were too many clichés and what was meant to be an exciting edge-of-your-seat thriller ended up being a love story and a soppy one at that.

This is a movie for George Clooney fans, very definitely one to appeal more to a female audience. I was quite bored and I am usually quite forgiving and want to give films every possible chance. I would not recommend it unreservedly and would suggest that if you watch it, do it while you are doing something else as well.