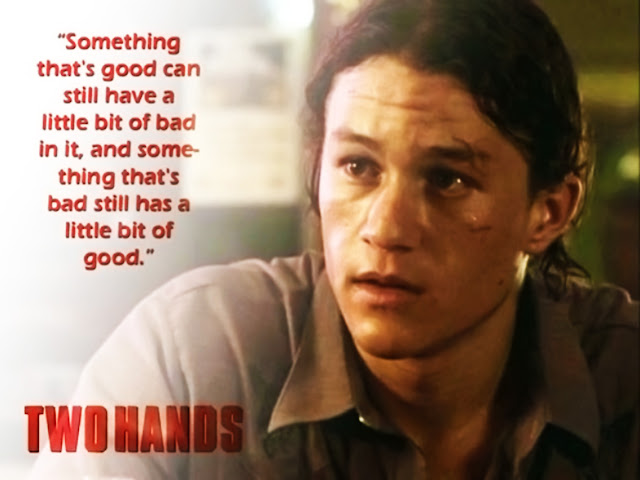 “The punishment of criminals should be of use; when a man is hanged he is good for nothing” - Voltaire
We watched an interesting and rather amusing (in a black humour sort of way) Australian film last weekend, which we enjoyed. It was Gregor Jordan’s 1999 “Two Hands” (), starring Heath Ledger, Bryan Brown and David Field. It is set in Sydney and one sees the seamy side of this metropolis with all of its wheeling and dealing, crime and ruthless “settling of accounts”. There is an interesting set of characters and the film is very Australian, and some things may seem a little strange to those people seeing it abroad. However, overall, it was quite a good film although there are some violent scenes in it, one particularly that made my stomach churn and ever more wary when I am driving...

The plot concerns Jimmy (Heath Ledger), who is given a simple job by underworld “boss” Pando (Bryan Brown) delivering $10,000 to a particular address. However, when no one answers the door Jimmy decides to take a dip at Bondi Beach to pass the time, but he notices that his clothes on the sand have been messed up and the money that he has stupidly left unattended, is gone. Jimmy rings Pando to tell him the problem, but not surprisingly Pando doesn’t want to hear what he thinks are Jimmy’s lame excuses. Pando and his boys try their best to locate Jimmy in order to “take care of him”, just as they took care of his brother (unbeknownst to Jimmy). Jimmy goes into hiding and decides to join another two inept criminals to rob a bank to get Pando’s money back. Throughout these trials and tribulations, he meets innocent and sweet country-girl Alex (Rose Byrne) and together they try to deal with all sorts of “situations” that arise.

The film is shot in Sydney and Kings Cross gets quite a showing, with all of its glitz and tinselly showiness. Although there are no koalas or gum trees in the movie, it is very much Australian and Bryan Brown does a great job of portraying the typical Aussie bloke who while being an underworld kingpin manages to be a good father and husband in the suburbs. Heath Ledger does an excellent job of portraying the naïve but honest (in a dishonest way!) Jimmy, while Rose Byrne is perfectly cast as the young ingénue that provides a romantic interest. One cannot help but feel involved with Jimmy’s plight and despite the crookedness of his actions, one feels that all he needs is the love of a good woman (aka: Alex) to bring him back on to the straight and narrow.

There is an interesting thread of the supernatural injected into the film as Jimmy’s brother’s ghost enters the story now and then to comment on the proceedings and lend a protecting hand to Jimmy. The subplot involving the two teenagers that steal Jimmy’s $10,000 is poignant and dark and essential for the films dénouement.

We enjoyed this film, although some scenes could prove challenging for some viewers who are sensitive to violence and strong themes. It is best classed as a “black comedy” and it paints a fairly realistic picture of small time criminal life in a big city, although the naïveté and unlikeliness of some of the plot twists can be seen to be artistic licence to make for a more engaging movie.
Posted by Intelliblog at 10:43