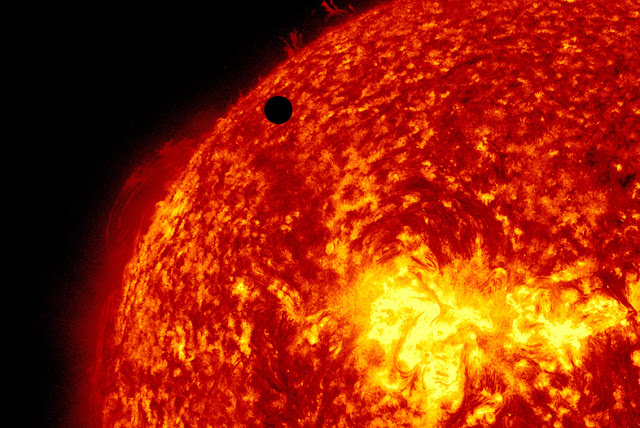 “Venus favours the bold.” - Ovid
The world’s been rather a-buzz with excitement over the past couple of weeks regarding the rare event of the transit of Venus. A transit of Venus occurs when the planet Venus is observed to move across the face of the Sun. The first transit since 1882 occurred on 8th June 2004. The next transit occurred today, on 6th June 2012, was visible in many places around the world. In Australia, for example, the transit was visible Sydney from beginning to end, starting at 8.16am (1st contact) and ending at 2.44pm (last contact). Part of the excitement and the hype surrounding this event is that the following transit of Venus won’t occur until 2117, which is certainly beyond the lifetime of most people around during this transit.

Although it was quite overcast in Melbourne and thus we were unable to watch the transit of Venus first hand and “live”, a number of excellent photographic records of the event have been published and it is good to be able to witness this event, even second-hand, through technology. Some of the photographs that are being published are quite spectacular and fuel my fascination with all things astronomical.

There is a connection with Australia as far as the transit of Venus is concerned. On June 3rd, 1769, British navigator, Captain James Cook, British astronomer Charles Green and Swedish naturalist Daniel Solander observed and recorded the transit of Venus on the island of Tahiti during Cook’s first voyage around the world. This unusual astronomical phenomenon takes place in a pattern that repeats itself every 243 years, so there was considerable scientific interest in the event in Cook’s time. The event includes two transits that are eight years apart, separated by breaks of 121.5 and 105.5 years. These men, along with a crew of scientists, were commissioned by the Royal Society of London for the primary purpose of viewing the transit of Venus. Not only would their findings help expand scientific knowledge, they would help with navigation by accurately calculating the observer’s longitude. At this time, longitude was difficult to determine and not always precise. A “secret” mission that followed the transit included the exploration of the South Pacific to find the legendary Terra Australis Incognita or “unknown land of the South”.

After finishing his task in Tahiti, Cook proceeded to New Zealand, where he took formal possession of areas from both the main islands and accurately charted 3860 km of coastline for the first time. During 1770 he the discovered the east coast of Australia, which he charted and claimed for Great Britain under the name of New South Wales. The rest of course is history!

The image above is provided by NASA. The SDO satellite captured an ultra-high definition image of the Transit of Venus across the face of the sun on June 5th from space.
Posted by Intelliblog at 12:50