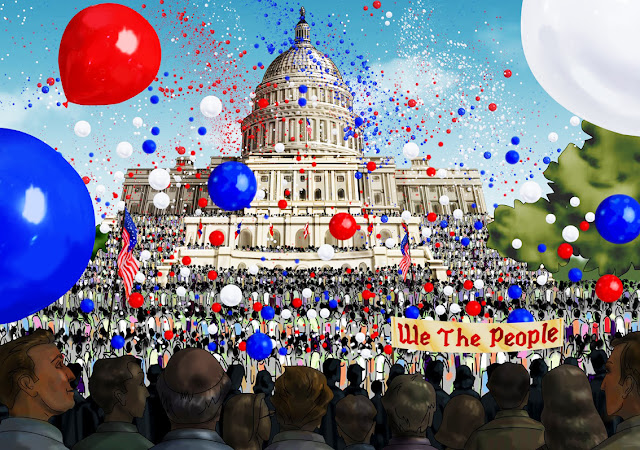 “The Constitution only gives people the right to pursue happiness. You have to catch it yourself.” - Benjamin Franklin
Happy Independence Day to all my readers in the USA!

The Declaration of Independence is a document that was approved by the Continental Congress on July 4th, 1776, and it announced the separation of 13 North American British colonies from Great Britain. The Congress on July 2nd had “unanimously” resolved (by the votes of 12 colonies with New York abstaining), that “these United Colonies are, and of right ought to be Free and Independent States.” Accordingly, the day on which final separation was officially voted was July 2nd, although July 4th, the day on which the Declaration of Independence was adopted, has always been celebrated in the United States as the great national holiday, the Fourth of July, or Independence Day.

July 4th is a day of patriotic celebration and family events throughout the USA. In the words of Founding Father John Adams, the holiday is “the great anniversary festival. It ought to be commemorated as the day of deliverance… It ought to be solemnized with pomp and parade, with shows, games, sports, guns, bells, bonfires, and illuminations, from one end of this continent to the other, from this time forward forever more.”

As it is a Summer holiday, the celebration of Independence Day mainly take place outdoors. Families often celebrate Independence Day by hosting or attending a picnic or barbeque and take advantage of the day off (and, in some years, long weekend) to gather with relatives. Red, white and blue decorations reflecting the colours of the American flag are put up in public spaces and outside homes. Parades are often in the morning, while fireworks displays occur in the evening at such places as parks, fairgrounds, or town squares.

The night before the Fourth of July was once the focal point of celebrations, marked by raucous gatherings often incorporating bonfires as their centerpiece. In New England, towns competed to build towering pyramids, assembled from hogsheads and barrels and casks. They were lit at nightfall, to usher in the celebration. The highest were in Salem, Massachusetts, composed of as many as forty tiers of barrels; these are the tallest bonfires ever recorded. The custom flourished in the nineteenth and twentieth centuries, and is still practiced in some New England towns.

Independence Day fireworks are often accompanied by patriotic songs such as the national anthem – “The Star-Spangled Banner”, “God Bless America”, “America the Beautiful”, “My Country, ‘Tis of Thee”, “This Land Is Your Land”, “Stars and Stripes Forever”, and, regionally, “Yankee Doodle” in northeastern states and “Dixie” in southern states. Some of the lyrics recall images of the Revolutionary War or the War of 1812. A salute of one gun for each state in the United States, called a “salute to the union,” is fired on Independence Day at noon by any capable military base.