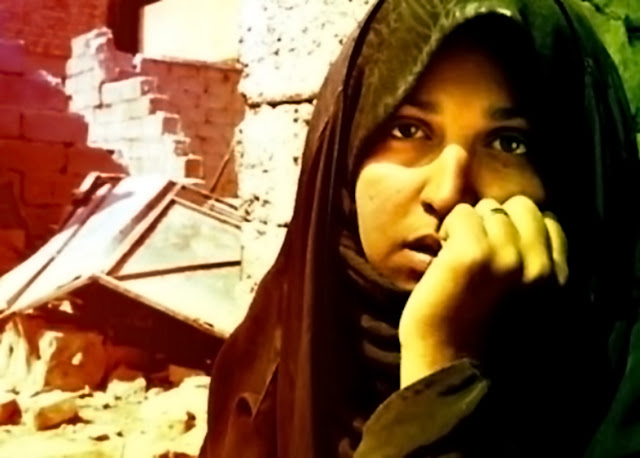 I have been following the news of the terrible situation in Syria, which has been dragging on for months and months now, worsening all the while. Each day in the news one hears of more atrocities, more attacks, more bombings, more and more people dying, victims to the internecine destruction on both sides of the conflict. I cannot pretend to understand what is actually happening there, who is wrong and who is right, who is telling the truth and who is lying. All I know is that there are many innocent victims who are dying needlessly as they are caught in the crossfire.

Unfortunately, there is no sign of the conflict resolving and the international community is hesitant to intervene decisively. In the meantime, the conflict threatens to turn into a massive, full-scale civil war – surely the worse kind of war there is… I wrote the short story below a few years ago when the tinder-box of the Middle East was once again a bloody battle zone and thousands of innocents lost their lives needlessly. Unfortunately, history repeats itself again and again and the story below is once again topical…

“Mama, I'm scared…”
“I'm here my treasure, I'm holding you.” Her voice gentle and her hands firm around the fragile little body that trembled against her racing heart.
“Mama, the walls might crash down on us and kill us…”
“The walls are strong, your own grandfather built this house with his own hands. The walls have stood firm for many years now and they will be here for your children to grow up in.” Her eyes wide open, the whites shining in the darkness. The face haggard and dirty, every now and then illuminated by the flash of an exploding bomb. The small window in the basement that would not close fully was enough to let the fear in. The smell of death encircled them and the noise of battle surrounded them.

“Where is my father, Mama?” The little voice was shaky, the trembling of the little body in her embrace not only caused by the cold.
“Your father is helping injured people, my love. He is at the hospital, you know that.”
“Why do they want to kill us, Mama?”
“They do not want to kill us, my darling, they are bombing the bad people.”
“Was my friend next door bad?”
The woman closed her eyes and stifled a wave of emotion. She should not cry now. She should be strong. Strong for her daughter's sake.
“No, our good neighbours were not bad, just unlucky…” She hugged the child tightly. “They were hit by mistake as they were coming back from the market.”

There was a respite in the awful sound of warfare outside and the flashes of light gave way to an unearthly greenish light. The sudden quiet in the cellar was more foreboding to her ears than all of the unholy uproar previously. She shuddered to think of the future, yet that future was only moments ahead. The concept of 'next week' was something that had become foreign to her. To survive this day, to keep herself alive for her daughter, that was her only purpose now. If tomorrow dawned for them she could thank God and try her best to survive that tomorrow also.

“Mama, when is my father coming back?”
“Hush darling, you know he is needed where he is more than here.” Her voice was hardly a whisper and it took great restraint not to cry out the pain that was bottled up inside her for days now. She felt her heart beating and it seemed to her to be a hand grenade, ready at any moment to explode and devastate her whole being. Her husband would not come back, she knew that. Her daughter must not know, now.
“Is he helping the sick people?”
“Yes, my heart of hearts, he is at the hospital and he is operating on the injured, helping them to get better.” She embraced the girl and started to sing her a lullaby. A soft, peaceful sound that reverberated in the darkness and calmed herself more than the child. A lullaby that was sung to her by her grandmother and her mother. A lullaby that she wanted her daughter to sing to her own children when she had them. But that was light years away, the priorities of the here and now dictated otherwise.

The whistling sound of a bomb falling, a flash of brilliant light and an explosion were followed by more. The child started in her arms and screamed. These bombs were falling too close! Her blood turned to ice and her eyes closed as she hugged her daughter to her breast.
“Mama! I wish papa was here now! He would protect us…”
“I'm here for you, my darling, I will not let them harm you, hush!” Her voice rang out above the sounds of explosions. The ground was shaking around them and the old timbers above them creaked. Showers of dust fell around them and the flash of the explosions illuminated them making them seem like a golden rain.

The house collapsed as if it were made of cards. Debris was hurled around the neighbourhood and the charred timbers pointed up accusingly as the bomber planes disappeared over the horizon. The village had been razed to the ground. Smoke billowed in dark clouds over slowly burning piles rubble and whimpers of the survivors under fallen walls were the only sound that could be heard now. Deep in a cellar a woman is quietly singing a lullaby clutching the child in her arms. She rocks her precious daughter in her arms amidst the ruins, and her tears stream down her face. The blackened skin of her cheeks is bleached as each hot droplet trickles down. Her voice breaks as she looks at the face of the lifeless child on her lap.
Posted by Intelliblog at 22:00