DORMITION OF THE VIRGIN MARY 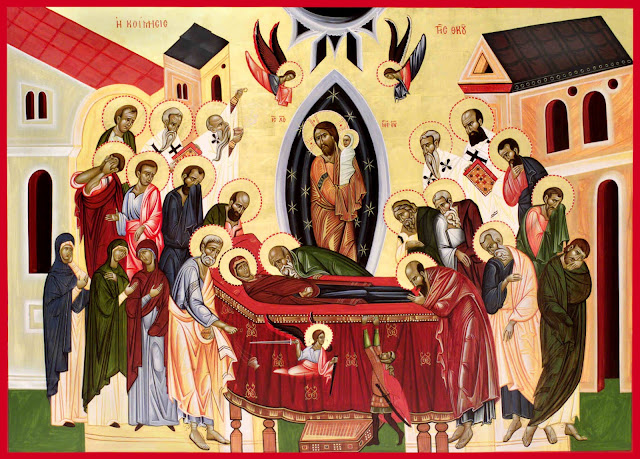 “A faith is a necessity to a man. Woe to him who believes in nothing.” - Victor Hugo

Many Christians today celebrate the Feast of the Dormition of the Virgin Mary and her Ascension into Heaven. It is the principal feast day of the Virgin Mother. It is celebrated annually on August 15 in many countries, particularly in parts of Europe and South America. Some countries celebrate the day at other times of the year. This day is also known as the Assumption of the Blessed Virgin Mary, the Dormition of the Most Holy Mother of God (in the eastern countries), or the Feast of the Assumption. Assumption Day is a public holiday in countries such as Austria, Belgium, Chile, Croatia, France, parts of Germany, Guatemala, Greece, Italy, Poland, Portugal, Slovenia, Spain and parts of Switzerland. However, Assumption Day is not a public holiday in countries such as Australia, Canada, the United Kingdom, and the United States.

Central to the celebration is the belief that when Mary, the mother of Jesus Christ, died, her body was not subjected to the usual process of burial and decomposition, but ascended into heaven and reunited there with her soul. This holiday, which has been celebrated since the fourth century AD, is a Christianisation of an earlier harvest festival and, in many parts of Europe, is known as the “Feast of Our Lady of the Harvest”. For centuries prior to the Christian era, celebrations were held in the honour of the goddess Isis of the Sea, who was born on this day according to mythology. With the coming of Christianity, church leaders decided that the easiest way to handle this widespread and popular pagan ritual was to simply change it into a Christian holiday, hence the introduction of Assumption Day.

The day is marked by special celebratory liturgies, and masses, colourful processions through the streets, fairs and other popular celebratory practices, and firework displays. In Sicily and rural areas outside Rome, a bowing procession is the day’s main event. A statue of the Virgin Mary is carried through the town to a ceremonial arch of flowers, where a group of people holding a statue of Christ awaits her arrival. Both statues are inclined toward each other three times, and then the Christ figure precedes the figure of Mary back to the parish church for a special benediction.

In the past, some Italian plazas were flooded. Citizens would ride through the temporary “lakes” in carriages and it was common for people to carry bowls of rose-scented water, which they sprinkled on themselves – possibly a carryover from a pagan ritual in which the gods were petitioned to provide adequate rainfall for the crops, or as a tribute to the pagan goddess Isis of the Sea. Assumption Day is also an important holiday in France where the Virgin Mary has been the patron saint since 1638.

In Sao Paulo and other parts of southern Brazil, the feast is called Nosa Senhora dos Navegantes, or “Our Lady of the Navigators”. Pageants are held on decorated canoes, each carrying a captain, a purser, three musicians, and two rowers. They travel to small villages to entertain and feast. Towns may have small church processions with musicians whose costumes and demeanour depict the “Three Wise Men” who are mentioned in the Bible.

In the Greek Orthodox faith, the Feast of the Dormition is preceded by a two-week fast, referred to as the Dormition Fast. From August 1 to August 14 (inclusive) no red meat, poultry, meat products, dairy products (eggs and milk products), fish, oil, and wine are consumed. The Dormition Fast is a stricter fast than either the Nativity Fast (Advent) or the Apostles’ Fast, with only wine and oil (but no fish) allowed on weekends.

In some places, the services on weekdays during the Fast are similar to the services during Great Lent (with some variations). Many churches and monasteries in the Russian tradition will perform the Lenten services on at least the first day of the Dormition Fast. During the Fast, either the Great Paraklesis (Supplicatory Canon) or the Small Paraklesis are celebrated every evening except Saturday evening and the Eves of the Transfiguration and the Dormition. The first day of the Dormition Fast is a feast day called the Procession of the Cross (August 1), on which day it is customary to have a crucession and perform the Lesser Sanctification of Water.
Posted by Intelliblog at 22:08