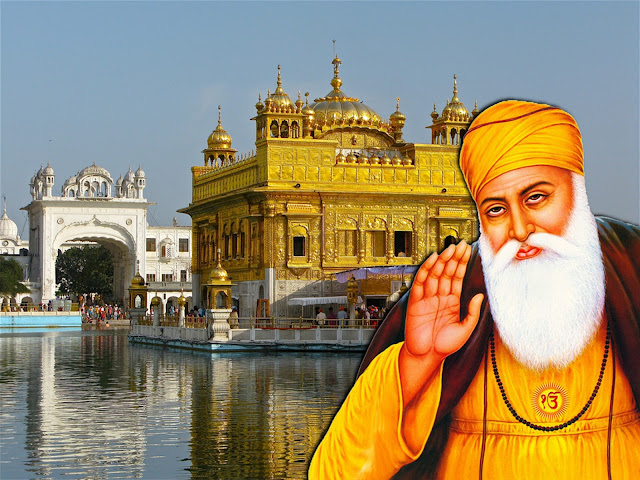 “Although the future of religion is bleak but yet one hope is there in the form of Sri Guru Granth Sahib Ji which teaches us all God’s message of love and gives direction to life.” – Arnold Toynbee
On November 28, Gurunanak Jayanti is celebrated. This is the birth anniversary of Guru Nanak, the founder of Sikhism and among the Sikhs it is a most important feast and an occasion for great rejoicing. Guru Nanak was born near Lahore, and his birth anniversary is celebrated with much pomp and religious fervour across the Sikh community.
Guru Nanak (1469 AD – 1539 AD) was born in a village named Rai Bhoi di Talwandi, presently popular as Nankana Sahib, near Lahore, Pakistan. Biographical sources state that from childhood he showed deep interest in matters pertaining to divinity and spirituality. Later in his life he completely engrossed himself in preaching the importance and power of spirituality in one’s life and his teachings ultimately gave birth to Sikhism.
The festivities for the day begin with early morning processions known as the “prabhat pheri”. The procession starts at a local Gurudwara (Gateway to the Guru, is the place of worship for Sikhs) and makes its way around the neighbourhood, with everyone chanting verses and singing hymns. Prabhat pheris are held on the days prior to Gurunanak Jayanti; and for the three days too, there is a continuous reading of the Guru Granth Sahib, from beginning to end, without a break.
The Guru Granth Sahib is the principal sacred scripture of Sikhism. Originally compiled under the direction of Arjan Dev (1563–1606), the fifth Sikh guru, it contains hymns and religious poetry as well as the teachings of the first five gurus. Also called Adi Granth, Granth, and Granth Sahib.

The day of the festival is marked by a special procession in which pride of place is reserved for the Guru Granth Sahib, carried on a beautifully decorated float and accompanied by musicians and five armed guards (who represent the panj piaras). Prayers and kirtans at Gurudwaras are followed by community meals (langar), where everyone (irrespective of religious conviction) are welcome.
The Harmandir Sahib also Darbar Sahib and informally referred to as the Golden Temple  is a prominent Sikh Gurdwara located in the city of Amritsar, Punjab, India. It was built by the fifth Guru of the Sikhs, Guru Arjan Dev, in the 16th Century. In 1604, Guru Arjan Dev ji completed the Adi Granth, the holy scripture of Sikhism, and installed it in the Gurdwara. There are four doors to get into the Harmandir Sahib, which symbolise the openness of the Sikhs towards all people and religions. The present day Gurdwara was rebuilt in 1764 by Jassa Singh Ahluwalia with the help of other Sikh Misl’s. In the early nineteenth century, Maharaja Ranjit Singh secured the Punjab region from outside attack and covered the upper floors of the Gurdwara with gold, which gives it its distinctive appearance and English name the Golden Temple.
Posted by Intelliblog at 00:43