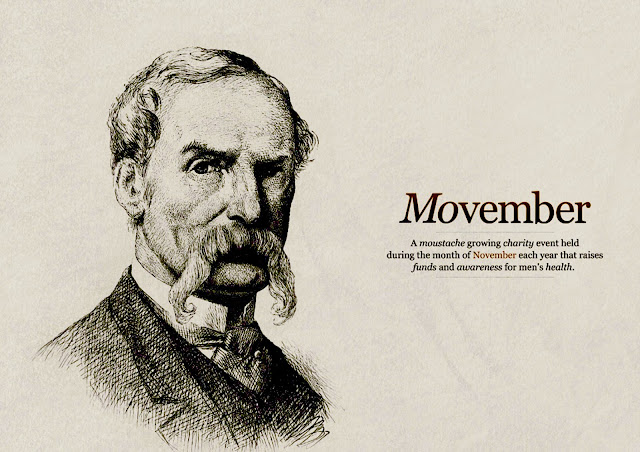 With “Movember” almost over, it is perhaps appropriate to take stock of this initiative and evaluate its goals. Movember (a portmanteau word from moustache and November) is an annual, month-long event involving the growing of moustaches during the month of November to raise awareness of men’s health problems and to raise funds for associated charities. The Movember Foundation runs the Movember charity event, housed at www.movember.com.

The goal of Movember is to “change the face of men’s health.” By encouraging men (“Mo Bros”) to get involved, Movember aims to increase early cancer detection, diagnosis and effective treatments, and ultimately reduce the number of preventable deaths. Besides getting an annual check-up, the Movember Foundation encourages men to be aware of any family history of cancer, and to adopt a more healthful lifestyle.

Since 2004, the Movember Foundation charity has run Movember events to raise awareness and funds for men’s health issues, such as prostate cancer and depression, in Australia and New Zealand. In 2007, events were launched in Ireland, Canada, Czech Republic, Denmark, Spain, the United Kingdom, Israel, South Africa, Taiwan and the United States. The event has spread from Australia to South Africa, Europe and North America. As of 2011 Canadians were the largest contributors to the Movember charities of any nation. In 2010, Movember merged with the testicular cancer event Tacheback. In 2012 the Global Journal listed Movember as one of the top 100 non government organisations in the world.

The immense popularity of the event cannot be denied and there is a great buy-in from the community. The emphasis on prostate cancer, while understandable (this is after all “the” male cancer par excellence to counterbalance the women’s own breast cancer), is a little unfortunate. There is quite a controversy raging in terms of screening for prostate cancer. The advocates for screening (typically specialist doctors who treat prostate cancer) and those who do not believe in its efficacy (typically public health practitioners and GPs) quote studies and research that support their divergent opinions.

The extensive prostate cancer screening trials (similar to the ones for breast cancer 30 years ago), have only been published recently, and the results are ambiguous. Some studies show a small benefit, while others show no benefit of screening. It is something that statisticians are still arguing over and it supplies each side of the debate with enough ammunition to further its own different opinion. As far as the general public is concerned, there is confusion (as man may get conflicting advice from equally respectable men’s heath experts) and there is the touting of prostate screening by some organisations as the “magic bullet” that will reduce prostate death rates in a similar way that breast cancer screening has (breast cancer screening certainly works!).

Unfortunately, prostate cancer screening, diagnosis and treatment is a minefield. Not only is screening equivocal, but once the disease is definitively diagnosed, the treatment is damaging too. Despite real advances in surgical removal of cancerous prostates (“radical prostatectomy”), the chances are that most men will be rendered impotent by the operation and most will develop urinary incontinence. So, there may even be harm in prostate cancer detection! Detecting cancer in men for whom treatment will confer no benefit is very damaging. Even the diagnosis of this cancer is with ridden problems: Men diagnosed with prostate cancer  are nearly ten times more likely to commit suicide than before...

So what is the answer? Everyone agrees (and the research evidence is quite strong) that cancer prevention works. Diet and lifestyle are the by far the most effective measures in protecting against a range of cancers, including prostate cancer. Eating a wide variety of good food with lots of fresh, seasonal vegetables and fruit less dairy and meat, reducing fats especially saturated fat, keeping physically active, stopping smoking and making sure you greatly reduce alcohol consumption are very real, effective ways of lessening the incidence of cancer (and many other diseases!). Movember would be a better advocate for men’s health if it highlighted these self-help steps.

We are fast becoming a society of instant gratification, hedonistic pleasures, immediate solutions, technological fixes and “magic bullet” cures. Taking personal responsibility for one’s health, while advocated in many quarters does not have the uptake that it needs to have to make a difference. We would much rather swallow a miraculous tablet, have a wonderful life-saving operation that will rid us of disease, and in the meantime enjoy ourselves with physical pleasures. Movember can make a difference, but it does need a shift in its emphasis to be even more effective.
Posted by Intelliblog at 10:13