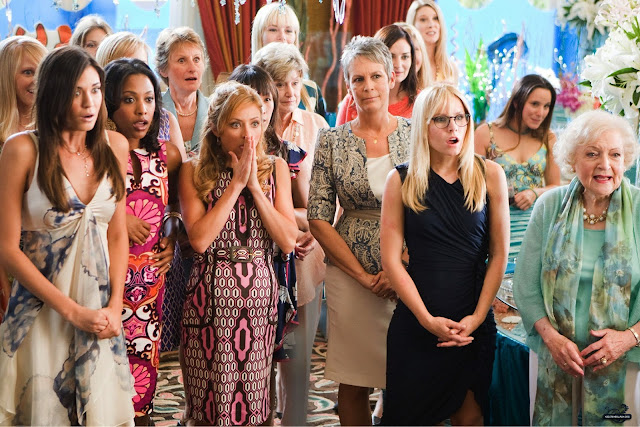 “I had a hard time with bullying. I ate lunch in the bathroom.” - Julianne Hough
Sometimes one wants to sit in front of the TV and watch junk food for the brain. Something light and non-challenging in terms of content, storyline, acting and meaning. Just for those days when one’s brain hurts and needs a bit of a respite from the deep and meaningful… Hollywood, of course, is well-suited to producing a host of such films and they are quite popular with viewers who are on the scrounge for easily consumed, predigested pap that satisfies one’s sweet tooth of the brain.
We watched such a film at the weekend as we were tired and had had a challenging previous couple of days. The film was mildly amusing, virtually non-offensive, adhered to standard type-casting, very light-on and was something one could watch while concentrating on various other things too. It was the 2010 Andy Fickman feature “You Again” starring Kristen Bell, Odette Annable, Jamie Lee Curtis, James Wolk, Betty White and Sigourney Weaver. It was written by Moe Jelline, better know as the writer of the TV sitcom “Love and Marriage” of 1996.

The plot revolves around Marni (Bell) a geeky, ugly kind of teenager that boys aren’t interested in and easy prey for the taunts and torments of the mean girls. Her arch nemesis is the popular and beautiful Joanna (Annable), the head cheerleader. Fast-forward several years, when Marni has become a successful woman with a good job in PR. She goes back home for her brother Will’s (Wolk) wedding and to her horror discovers that her brother is about to marry Joanna. When they meet she wants Joanna to apologise to her for the way she treated her in High School, but Joanna pretends she doesn’t even remember Marni. Marni tells her mother, Gail (Curtis) about the situation with Joanna, but Gail tells her to leave the past alone. However, when Gail learns that Joanna’s aunt Mona (Weaver) is her old friend from High School, Ramona, she changes tune. It turns out that the relationship between Gail and Ramona wasn’t all that rosy either. When Marni learns that Joanna really does remember her, she sets out to expose her true bitchy colours to her brother. But things will get a little more complex…

Now that I have written the summary I realise how even more inconsequential this movie was, but like junk food, so easily consumed. Although the film is hardly a romantic comedy, it is a chick flick in that it has a strong female cast that does its best with the material it has been handed. Betty White as “Granny Bunny” tries her best to get laughs, but the material she has is quite weak. Weaver and Curtis that are quite accomplished actresses and have obviously done this film in order to pay the bills. They try their best to do what they can with the often childish plot and lines.

The moral of the story is based on bullying and the terrible effects it has on people, but unfortunately this was trivialized and sugar-coated and the fluff got in the way of making a point about the lives that can be destroyed by bullying. Watch the film at your peril, but as I said, sometimes only mindless pap will do…
Posted by Intelliblog at 11:00