A CARNATION FOR PHILLIP V 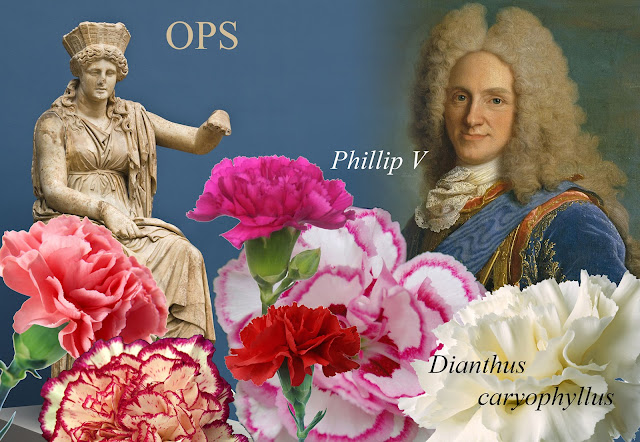 “Don’t part with your illusions. When they are gone, you may still exist, but you have ceased to live.” Mark Twain
Today is the anniversary of the birth of:

Today’s birthday flower is the carnation, Dianthus caryophyllus.  Dianthus is from the Greek meaning it is Zeus’s flower (Zeus = Dias; anthos = flower). It is therefore under the dominion of Jupiter, astrologically. In the language of flowers, a striped carnation means refusal, a yellow carnation means disdain. A pink carnation is symbol of divine love or motherly love, legend having it that pink carnations sprang from the earth when the Virgin Mary’s tears fell to the soil.  A red carnation is a symbol of woman’s love and of fascination.
In the Roman calendar, today is XIV Kalends January and the third day of the festival of the Saturnalia. On the third day of the Saturnalia the ancient Romans celebrated the Opalia, in honour of the goddess Ops, wife of Saturn. She was the goddess of success and fertility and many sacrifices to her meant enduring prosperity for Rome and her people.
The following notables died on this day: In 401, St Anastasius I, Pope of Rome; in 1370, Urban V (Guillaume de Grimoard), Pope of Rome.
Posted by Intelliblog at 11:11