MOVIE MONDAY - WE BOUGHT A ZOO 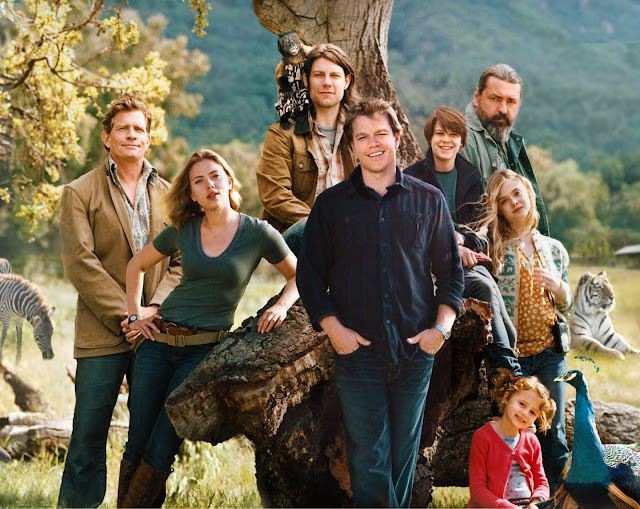 “If having a soul means being able to feel love and loyalty and gratitude, then animals are better off than a lot of humans.” - James Herriot
At the weekend we were in the mood for something extremely light and breezy to watch after a particularly exhausting couple of days of shopping, chores, gardening and odd jobs around the house. I had bought a DVD on sale some time ago and it looked as though it would be ideal. Sure enough, it was just we needed and we thoroughly enjoyed it. It was Cameron Crowe’s 2011 “We Bought a Zoo” (http://www.imdb.com/title/tt1389137/), starring Matt Damon, Scarlett Johansson, Thomas Haden Church, Maggie Elizabeth Jones, Elle Fanning and Colin Ford.
Although the film is a typical Hollywood froth and bubble affair, very lightweight and formulaic, it is also a little whimsical and has the occasional poignant moment. The story centres on Benjamin (Damon), who is suffering the loss of his beloved, young wife. In a bid to start his life over and to help his kids get over their isses, he purchases a large house that has a zoo attached. Or rather a zoo that has a house attached! This is very welcome news for his daughter (Jones) who is delighted, but his son (Ford) is not happy about it as it will mean moving out of the City and losing all his friends. The zoo is need of drastic maintenance and extensive renovations and Benjamin sets about the work with the head keeper, Kelly (Johansson), and the rest of the zoo staff. Very soon, Benjamin is facing huge economic hardship as the zoo consumes all of his savings. Benjamin must decide on whether he and the staff can get the zoo back to its former glory and open it to the paying public. Add to that a very strict zoo inspector and interpersonal problems and you have the basis of the old stock romantic comedy potboiler with quirky touches.
Much of the film’s success is due to the exceptional performance of Maggie Elizabeth Jones who plays Benjamin’s daughter. The little girl is delightful and steals every scene she is in. Colin Ford as Benjamin’s son plays well, but unfortunately he has landed the role of a surly, bitter and twisted child who has been psychologically scarred by the loss of his mother and his perception of a father who doesn’t care about him. Damon and Johansson play well, although the chemistry between them is rather lacklustre. By the same token, I should hasten to add that both of them deliver solid performances, especially Damon who shows rises tot eh demands of the director in terms of his acting repertoire.

The film is well photographed and the music score is delightful. Unobtrusive but very sympathetic to the action. The flashback vignettes showing the special relationship between Benjamin and his dead wife are quite special. For what it is (a feel-good family movie), the film is good and its light-weight material will please most people who do not set their expectations too high. Yes there are flaws, but if you don’t expect “high art” it is a good film to veg out on. We enjoyed it as we were in that sort of mood…