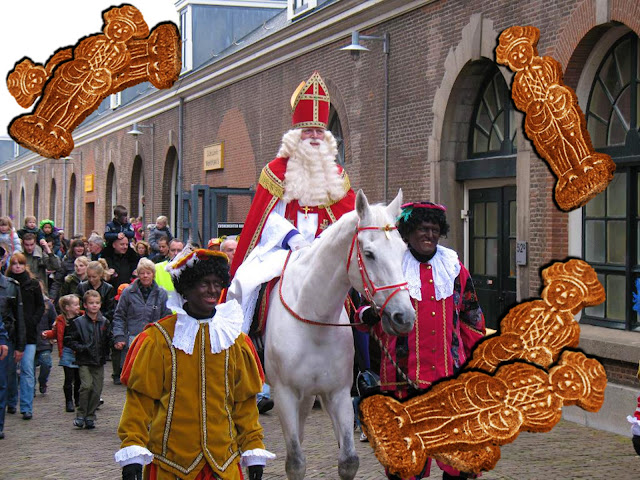 “Once again, we come to the Holiday Season, a deeply religious time that each of us observes, in his own way, by going to the mall of his choice.” - Dave Barry

Tomorrow is St Nicholas’s Feast Day. In Dutch the saint is known as “Sinterklaas”, the corruption of which is the English “Santa Claus”. He is reputed to have saved three maidens from prostitution one night by throwing to them through their window three golden balls, which they used as dowry. His nocturnal gifts are remembered by the Dutch tradition of gift-giving to children on the Eve of his Feast Day.  It is customary for children’s parties to be organised on December 5th and the Saint arrives dressed in Bishop’s garb, accompanied by two “Swarze Peters”, his black servants.  He reputedly comes from Spain bringing oranges, gifts and “spekulaas” a rich spicy sweet biscuit. In English-speaking countries, Santa Claus has been absorbed into the Christmas tradition, so he arrives at a much later date!

Ingredients
255 g    plain flour
1    pinch bicarbonate of soda
1    pinch salt
1 to 2    tablespoons of ground cinnamon, cloves, nutmeg, cardamom
Grated peel of an orange and a lemon
170 g    unsalted butter
140 g    light, soft brown sugar
4    drops almond essence
55 g    flaked almonds
1.5    tablespoons milk
A few whole blanched almonds
Method
Sieve dry ingredients together and add the peel, mixing well.  Chop butter into small pieces and add to the mixture, gradually working in all other ingredients to form a thick dough.  Leave it overnight in a cool place. The next morning roll out onto a floured board to a thickness of 0.5 cm and cut into fancy shapes with biscuit cutters or special patterned spekulaas moulds. Put on buttered baking tray, trim with whole almonds and cook in moderate oven (180˚C) for 20-30 minutes.
Posted by Intelliblog at 09:09