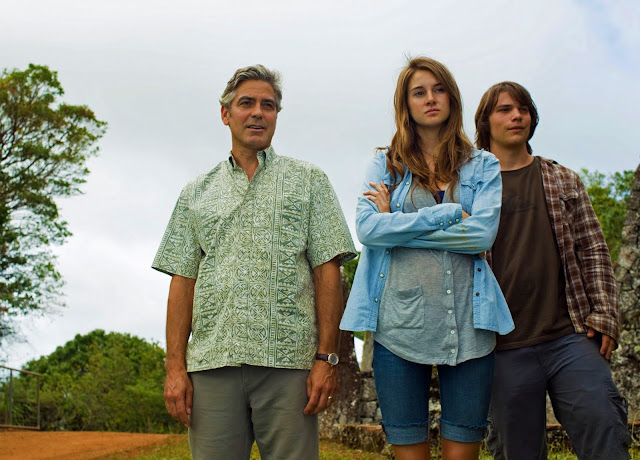 “Every good relationship, especially marriage, is based on respect. If it's not based on respect, nothing that appears to be good will last very long.” - Amy Grant
I must begin this movie review by saying that I have watched several George Clooney films and have been quite disappointed. The greatly lamentable “Men who Stare at Goats” is one example, the muddled and rather boring “Syriana” being another lemon, and the so-so “The American” is another one. When we watched yet another Clooney film at the weekend, I had great reservations, but ended up pleasantly surprised. This film was quite a decent one, and Clooney does show his mettle as a serious actor.
The movie we watched was the Alexander Payne 2011 film “The Descendants” starring George Clooney, Shailene Woodley and Amara Miller. This was a rather run-of-the-mill drama that would appeal to a wide audience, but especially women given the lead actor and the plot. The movie is set in Hawaii and one gets to see some of the lush scenery, but not as much as I had hoped… The subplot does have a lot to do with the land as Matt King (Clooney) is a lawyer and the head of a trust that holds many acres of prime Hawaiian land that is in his family and must soon be sold for development making all the family members very rich. The question here is one of heritage and despoliation of the environment and of ties with the past. Throughout much of the film we see this aspect explored and how the “descendants” of the original owner of the land will deal with the pressures put on them by a capitalistic system.
The main story involves Matt King (Clooney) having to cope with the serious boating accident of his young wife, which has left her in a coma with no hope of ever recovering. King’s two daughters, the feisty and rebellious teenager, Alexandra (Woodley), and the younger more vulnerable Scottie (Miller), have been rather distant from their father and their mother’s state has forced the survivors to come together and re-establish damaged relationships. What does not help is the discovery of the comatose mother’s guilty secrets and the way that Matt King must cope with those in order to allow himself to heal and then help his daughters cope with their loss.
The film is standard drama, competently acted and has won multiple awards: The 2012 Oscar for best writing, adapted screenplay; the 2012 AFI Best Movie award; 2012 BFCA Best Actor award, 2012 Golden Globe Best Movie and Best Actor awards, etc, etc. The young Shailene Woodley does an excellent job of playing the rather volatile but feisty Alex King and she has the meatiest role in terms of a transformation. She rises to the occasion with aplomb and no doubt we shall see a lot more of her good work in the future. All the other actors played well, including a small but very well-played supporting role by Judy Greer as a betrayed wife. There are some lighter moments, for example when Alexandra’s insensitive loud-mouthed friend Sid (Nick Krause) comes into the scene, but there is always a tension and sadness in the background.
The film is a good one to watch when one is in a receptive and fairly high spirited mood, as it otherwise can be a little depressing. It may be too slow for the liking of some and there are no high speed chase scenes and other adventure action shots. It is a drama, there is a lot of talking and character development and it des make the viewer think a little, “What if it were me in that situation, what would I do?” Ultimately this is a redemption movie, where the themes of “sinning” and “forgiveness” are explored, with the subplot around heritage and what we pass on from generation to generation – the tangible as well as the intangible.
Posted by Intelliblog at 10:07