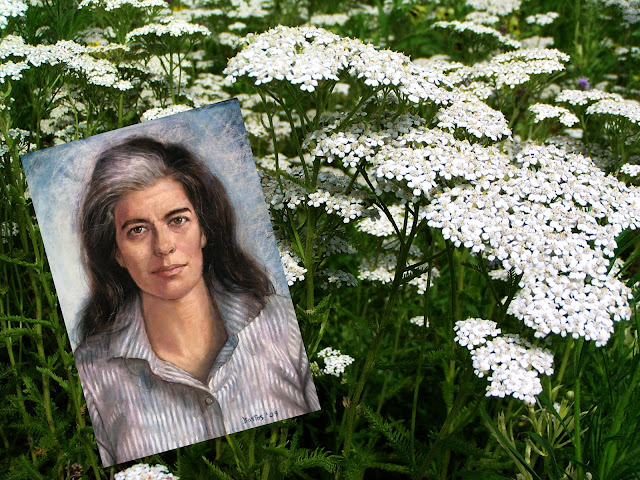 “What we need, is to use what we have.” - Susan Sontag

The plant for today’s birthdays is yarrow, Achillea millefolium.  The herb is named after Achilles, the ancient Greek hero who fought in the Trojan War. When the Greeks landed near Troy, some Trojans, led by Telephus, one of King Priam’s sons-in-law tried to stop the Greeks.  Achilles wounded Telephus with his spear, helped by Dionysus, god of wine. Telephus had been told by an oracle that Achilles would both wound and cure him. He promised Achilles to lead the Greeks to Troy if he would cure his wound. Achilles scraped rust from his spear and applied it to Telephus’s wound. The filings from the spear fell to the ground and yarrow sprang from them.

Yarrow symbolises heartache and cure.  Astrologically, this is a herb of Venus.  An older name of the herb is Venus-tree and several love oracles are based on this plant.  It was said that if the stem was cut across the initials of one’s future husband would appear.  An ounce of yarrow wrapped in a piece of yellow flannel and placed under one’s pillow would enable one to dream of one’s future spouse.  Eating yarrow at a wedding feast, ensured that the bridal couple would love one another for seven years.

***
Susan Sontag was born in New York City on January 16, 1933, grew up in Tucson, Arizona, and attended high school in Los Angeles. She received her B.A. from the College of the University of Chicago and did graduate work in philosophy, literature, and theology at Harvard University and Saint Anne’s College, Oxford.
Her books, all published by Farrar, Straus & Giroux, include four novels, “The Benefactor”, “Death Kit”, “The Volcano Lover”, and “In America”; a collection of short stories, “I, etcetera”; several plays, including “Alice in Bed” and “Lady from the Sea”; and nine works of nonfiction, starting with “Against Interpretation” and including “On Photography”, “Illness as Metaphor”, “Where the Stress Falls”, “Regarding the Pain of Others”, and “At the Same Time”.
Susan Sontag was considered one of the most influential liberal thinkers in the United States during the twentieth century. She was also a filmmaker and theatre director. As well as that, she was a human rights and anti-war activist. She owned fifteen thousand books in her personal library in her home.
In the 1970s, Susan Sontag learned she had breast cancer. Doctors did not expect her to survive. However, she went through a series of difficult treatments and she did survive. Her experience with the disease became the subject of one of her most famous works. “Illness as Metaphor”, published in 1978. “Illness as Metaphor” is a critical study of modern life. In it, the author maintains that modern culture creates myths or stories about sickness. She also criticised the language that people use when they talk about sickness – such as “battling a disease” or “the war on cancer”. Sontag felt these terms made sick people feel responsible for their condition. Her book gave readers the power to demand more information from doctors. Ten years later, she extended her opinions to the disease AIDS. Her short story “How We Live Now” was published in 1986 in the New Yorker magazine. Her book “AIDS and its Metaphors” was published two years later. It is about the social and personal effects of the disease.
Susan Sontag received many awards in the United States and from other countries. Israel, Germany and Spain honoured her with awards. In 2004, two days after her death, the mayor of Sarajevo announced the city would name a street after her. The mayor called her a writer and a humanist who actively took part in the creation of the history of Sarajevo and Bosnia. Susan Sontag died of leukaemia in New York City in 2004. She was seventy-one years old.
Posted by Intelliblog at 20:30