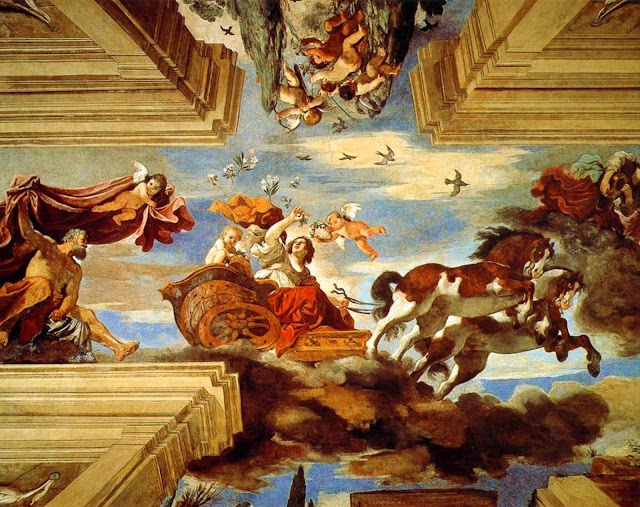 “A picture is a poem without words.” – Horace

For Art Sunday today, the life and art of “Il Guercino”. This artist’s real name is Giovanni Francesco Barbieri (born February 8, 1591, Cento, near Ferrara, Papal States, Italy – died December 22, 1666, Bologna). He was an Italian painter whose frescoes freshly exploited the illusionistic ceiling, making a profound impact on 17th-century Baroque decoration. His nickname Il Guercino (“The Squinting One”) was derived from a physical defect.

Guercino received his earliest training locally, but the formative influence on his style came from Bologna, especially from the naturalistic paintings of Lodovico Carracci. Such early works as “Madonna in Glory with Saints and a Donor” (1616; Royal Museum of Fine Arts, Brussels) have large forms, strong colour, and broad, vigorous brushwork. His method of using light and shadow was unrelated to the discoveries of Caravaggio and was derived from Bologna and Venice, which Guercino visited in 1618.

In 1621 Guercino went to Rome, where he played an important role in the evolution of Roman High Baroque art. Among many other commissions, he decorated the Casino Ludovisi. The main fresco, “Aurora,” on the ceiling of the Grand Hall, is a spirited romantic work, painted to appear as though there were no ceiling, so that the viewer could see Aurora’s chariot moving directly over the building. Yet it already reveals something of the crucial experience of his stay in Rome, his contact with Pope Gregory XV’s private secretary, Monsignor Agucchi, a propagandist for the classicism of Annibale Carracci’s balanced and restrained Roman style.

Guercino seems to have tried to make his own style conform with Carraccesque principles, an effort reflected in his “Sta. Petronilla” (1621; Capitoline Museum, Rome). On the death of Gregory XV in 1623, Guercino opened a studio in Cento. Then, upon the death of Guido Reni (1642), whose position in Bologna as heir to Annibale Carracci had been unassailable, he moved to that city, where he was the leading painter until his death. Some of Guercino’s late works, such as “Abraham Driving Out Hagar and Ishmael” (1657–58; Brera Picture Gallery, Milan), are impressive achievements, but other paintings seem weak or sentimental.

Guercino was remarkable for the extreme rapidity of his executions: he completed no fewer than 106 large altarpieces for churches, and his other paintings amount to about 144. He was also a prolific draughtsman. His opus includes many drawings, usually in ink, washed ink, or red chalk. Most of them were made as preparatory studies for his paintings, but he also drew landscapes, genre subjects, and caricatures for his own enjoyment. Guercino’s drawings are known for their fluent style in which “rapid, calligraphic pen strokes combined with dots, dashes, and parallel hatching lines describe the forms”. Guercino continued to paint and teach until his death in 1666, amassing a notable fortune. As he never married, his estate passed to his nephews, Benedetto Gennari II and Cesare Gennari.
Posted by Intelliblog at 09:22