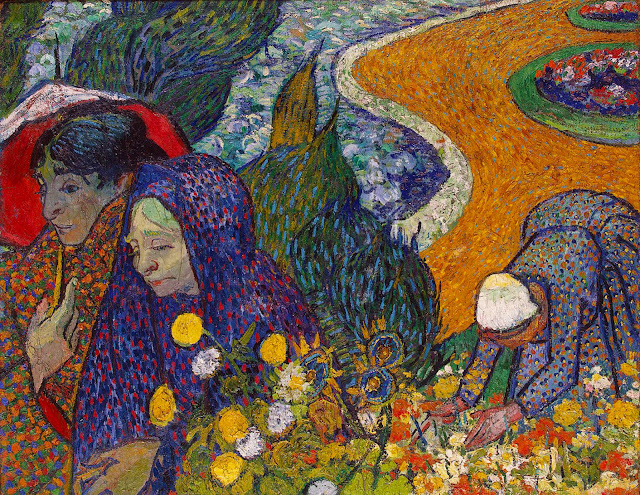 “Not even the excellent of humans is exempt from a touch of madness.” – Aristotle

Vincent van Gogh, one of the most important 19th century post-impressionist artists was born in Groot-Zundert, Holland on March 30, 1853. He was the son of a pastor and consequently was brought up in a religious and cultured atmosphere. At the same time, his rather constrained family environment contributed to him becoming highly emotional and lacking in self-confidence. Between 1860 and 1880, when he decided to become an artist, van Gogh had had two unsuitable and unhappy romances and had worked unsuccessfully as a clerk in a bookstore, an art salesman, and a preacher in the Borinage (a dreary mining district in Belgium), where he was dismissed for overzealousness.  He remained in Belgium to study art, determined to give happiness by creating beauty.

The works of his early Dutch period are dark and limited in colour, theatrically spot- lit, of a theme that extols the every day life of common people and labourers. “The Potato Eaters” (1885) is the most famous and characteristic of this period. In that year van Gogh went to Antwerp where he discovered the works of Rubens and purchased many Japanese prints. This stimulated the artist to explore the possibility of a colourful palette and find true expression of his talent through the means of pure colour.

In 1886 he went to Paris to join his brother Théo, who at that time was the manager of Goupil’s Gallery. In Paris, van Gogh studied with Cormon, met Pissarro, Monet, and Gauguin, and began to lighten his very dark palette and to paint in the short brushstrokes of the Impressionists. His nervous temperament made him a difficult companion and night-long discussions combined with painting all day undermined his health. He decided to go south to Arles where he hoped his friends would join him and help found a school of art. Gauguin did join him but with disastrous results. Near the end of 1888, an incident led Gauguin to ultimately leave Arles. Van Gogh pursued him with an open razor, was stopped by Gauguin, but ended up cutting a portion of his own ear lobe off.

Van Gogh then began to alternate between fits of madness and lucidity and was sent to the asylum in Saint-Remy for treatment.  In May of 1890, he seemed much better and went to live in Auvers-sur-Oise under the watchful eye of Dr Gachet. Two months later he was dead, having shot himself “for the good of all”. During his brief career he had sold only one painting. Van Gogh’s finest works were produced in less than three years in a technique that grew more and more impassioned in brushstroke, in symbolic and intense colour, in surface tension, and in the movement and vibration of form and line.

Van Gogh’s success as a consummate artist stems from his powerful fusion of form and content. His paintings are dramatic, lyrically rhythmic, imaginative, and emotional. The artist was completely immersed in his art and was at all times struggling to explain either his battle against madness or his comprehension of the spiritual essence of man and nature.

In 1888 Vincent van Gogh painted “A Memory of the Garden at Etten” (seen above), a recollection of his mother and his sister walking through a garden in his boyhood village. This was painted in response to Gauguin’s advice that he work more from imagination and less from nature. In a letter to his sister Wil, Vincent van Gogh explained that the motifs and the colors carried specific meanings. The “sombre violet violently stained by the citron yellow of the dahlias” suggested their mother’s personality, whereas the red and green presented Wil as a character out of a Dickens novel. The painting is a powerful emotional double portrait that is aesthetically pleasing as well as of great significance to the artist. It always reminds me a little of an Indian painting and the women are as though they are wearing saris. The yellow flowers are reminiscent of marigolds - so widespread in India and who knows, maybe Vincent had seen some Indian prints in amongst the Japanese ones we know he had studied.


Happy Easter if you are celebrating it!
Posted by Intelliblog at 11:21