ARAM IN SWEDEN AMONGST THE DATURAS 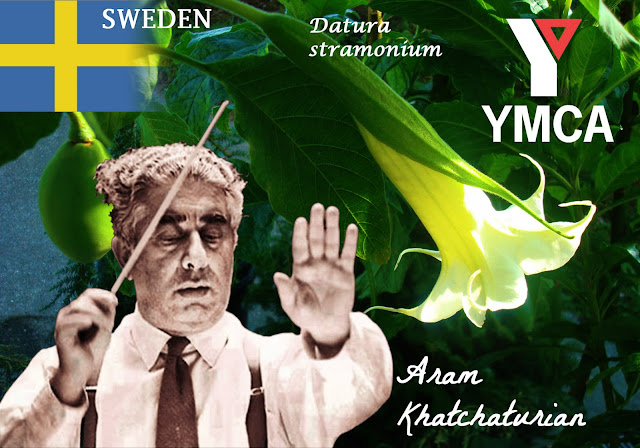 The thorn apple, Datura stramonium, is the birthday flower for today.  It symbolises deceitful charms, a most suitable meaning for a poisonous, although sweet-smelling and beautiful flower (datura means “angels’ trumpet”).  It was a plant supposedly used by the priests of Apollo in Delphi to induce hallucinations and evoke the prophecies of the Oracle.  Superstition says that even to fall asleep under this plant would cause death.  Astrologically, it is under the dominion of Jupiter.

Here is a beautiful piece by birthday boy, Aram Khatchaturian (1903-1978). It is his Masquerade suite: 1. Waltz; 2. Nocturne; 3. Mazurka; 4. Romance; 5. Galop. With John Giorgiadis, violin and the London Symphony Orchestra conducted by Stanley Black.

Sweden (today celebrating its Constitution Day, since 1809), is one of the Scandinavian countries with an area of 450,000 square km and a population of 9 million people. Its capital city is the beautiful Stockholm, often referred to as the “Venice of the North” because of the numerous waterways in its midst. The country is a long strip with richly forested mountains in the North, central lowlands and lakes and the very fertile Scania plain of the South. Most of the cities are in the South with Göteborg, Uppsala, Malmö, Linköping and Örebro the major ones. Timber, manufacturing, and mineral resources all utilised to their full make Sweden a rich country.