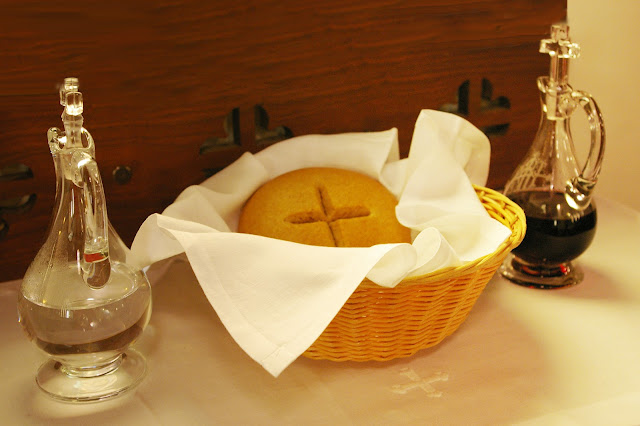 “Man shall not live by bread alone, but by every word that proceedeth out of the mouth of God.” – The New Testament, Matthew 4:4

August 1 is Lammastide (Lughnasad) and a Neopagan Sabbat. Lammastide, is named after Lammas, a contraction derived from “loaf mass”. It was on this day that the harvest beginning was celebrated.  The first cut sheaf of corn or the loaf of bread made from it, was offered in church to be blessed and ensure an abundant and untroubled harvest season. The Lammas Lands were the fields used for growing early crops or hay and these were opened on this day to allow common grazing until the next Spring.
Till Lammas daie, called August’s wheel,
When the long corn stinks of camamile.
In the Scottish Highlands, Lammastide became fused with Lugnasadh the festival of the Celtic god Lugh Lightborn.  This was celebrated with gatherings, bonfires, dancing, singing and sports.  It was one of the Quarter Days, when spirits walked the earth.  On this day, ladybird beetles caught should be released with the words:
Lady, Lady Lanners
Tak your cloak about your heid
And fly away to Flanders.
Fly ower moor and fly ower mead
Fly ower living, fly ower dead;
Fly ye East or fly ye west
Fly to her (or him) that love me best.
The ladybird would then fly away and alight towards or on one’s beloved or their home.  At the Lammas Fair in Scotland it was also traditional to celebrate “handfast” marriages.  This consisted of unmarried persons of either sex to choose a companion according to their liking.  They were to live together until Lammas Day the next year.  If they were pleased with their match, they continued to live together for life; if not, they were free to choose another mate.
Harvesting of corn was a very important activity as it ensured the year’s supply of grain and flour.  The Harvest Lord or “King of the Mowers” was the most experienced and trusted man elected by the harvest workers to direct operations.  Reapers wore gloves to protect their hands from cuts and prickles while they cut the corn.
Make sure of thy reapers, get harvest in hand
The corn that is ripe, doth but shed as it stand.
Grant Harvest Lord more, by a penny or two
To call on his fellows better to do.
Give gloves to thy reapers, a largess to cry
And ever to loiterers have a good eye.
Five Hundred Good Points of Husbandry (1573); Thomas Tusser (ca 1520-1580)