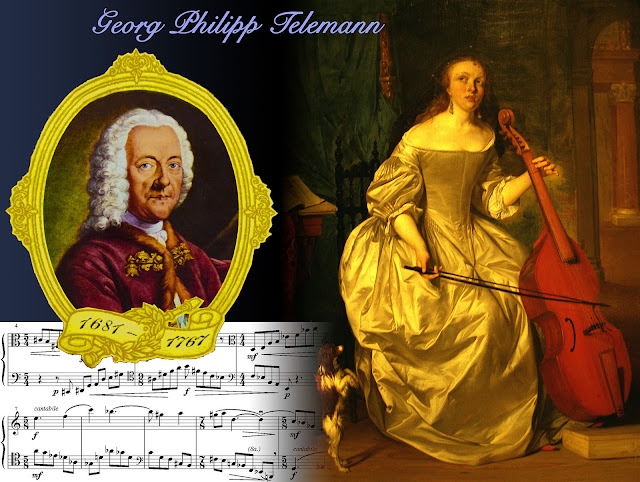 “Who hears music, feels his solitude peopled at once.” - Robert Browning
Georg Philipp Telemann (14 March 1681 – 25 June 1767) was a German Baroque composer and multi-instrumentalist. Almost completely self-taught in music, he became a composer against his family’s wishes. After studying in Magdeburg, Zellerfeld, and Hildesheim, Telemann entered the University of Leipzig to study law, but eventually settled on a career in music. He held important positions in Leipzig, Sorau, Eisenach, and Frankfurt before settling in Hamburg in 1721, where he became musical director of the city’s five main churches. While Telemann’s career prospered, his personal life was always troubled: His first wife died only a few months after their marriage, and his second wife had extramarital affairs and accumulated a large gambling debt before leaving Telemann.
He was a remarkably prolific, skillful, and forward-thinking, one of the foremost musicians of his day, who wrote a great many sacred and secular vocal works as well as orchestral, chamber, and keyboard music. A contemporary of Bach and Handel, Telemann shared many of their musical techniques and wrote for many of the same genres; and though his music is overshadowed by theirs, it has many charms, perhaps more evident in Telemann’s modest instrumental works (of which the Suite for Flute & Strings in A is a good choice) than in his 40 operas, 600 overtures, 44 liturgical passions, and other large works. Handel said Telemann could write an eight-part motet with the ease that someone else would write a letter.
Here is some of his wonderful music for viola da gamba, played by Hille Perl (viola da gamba) accompanied by the Freiburger Barockorchester and directed by Petra Müllejans. The viola da gamba is a bowed, stringed musical instrument used principally in chamber music of the 16th to the 18th century. The viol shares with the Renaissance lute the tuning of its six strings (two fourths, a major third, two fourths) and the gut frets on its neck. It was made in three sizes: Treble, tenor, and bass, with the bottom string tuned, respectively, to D, G (or A), and D. To these sizes was later added the violone, a double bass viol often tuned an octave below the bass.