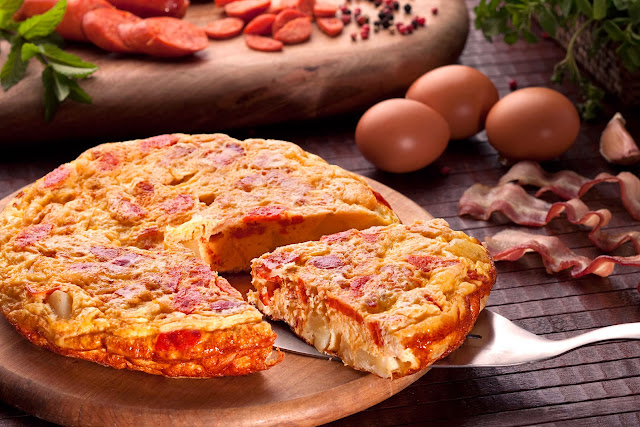 “Our curses on them that boil the eggs too hard! What use is an egg that is hard to any person on earth?” - Lady Gregory
World Egg Day is celebrated every year on the second Friday in October. The first World Egg Day in modern times was celebrated in 1996, but the egg has been celebrated since ancient times. People may make a special effort on this World Egg Day to enjoy the wonderful versatility of the egg. Eggs have a vital role to play in feeding people around the world, in both developed and developing countries.  They are an excellent, affordable source of high quality protein. To this end, here is a delicious egg recipe:
Spanish Omelette
Ingredients
500g waxy potatoes, such as Charlotte
50 g of butter
2 small red onions, finely sliced
1 red pepper, finely chopped
8-9 eggs
Chives (optional)
Salt, pepper, nutmeg
Method
Finely slice the onions and chop the red pepper, removing the seeds. Cut the potatoes into roughly ½ cm slices.

Heat the butter in a medium (about 24cm) frying pan over a low heat and cook gently for 10 – 15 minutes until starting to go brown, add the peppers and cook for a further 5 mins.

Put the potatoes in a steamer over boiling water for 10 - 12 minutes to soften. If you don’t have a steamer, put in a saucepan, cover with boiling water and simmer gently for around 8 - 10 minutes until just cooked through and drain well.

Break the eggs into a jug and beat with a fork, season with a generous grind of pepper, a pinch of salt and some ground nutmeg. Use scissors to snip the chives into small pieces and stir in (if using).

Heat the grill. Add a little more butter to the frying pan and add the potatoes. Pour over the egg mixture. Cook for 15 mins until almost set and golden brown underneath - you can use a spatula to lift the omelette up and check. Put the frying pan under the grill. Make sure the handle is outside the oven as it will become very hot and can burn. Cook for a further minute or two and serve.