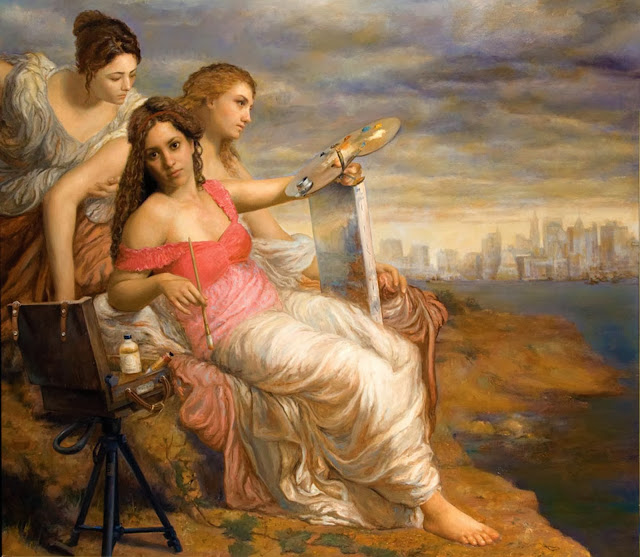 “Every man with a bellyful of the classics is an enemy to the human race.” - Henry Miller
Cesar Santos (born 1982) is a Cuban-American artist. He studied at the Miami Dade College and the New World School of the Arts before travelling to Florence, where he trained at the Angel Academy of Art under the tutelage of Michael John Angel, a student of Pietro Annigoni. He returned to Miami, where he developed his philosophy of marrying both the classical and the modern juxtaposed within one painting.
His influences range from the Renaissance to the masters of the nineteenth century to Modernism. With superb technique, he infuses a harmony between the natural and the conceptual to create works that are provocative and dramatic. He has been the recipient of numerous accolades including a first place award from a competition sponsored by the Metropolitan Museum of Art. Santos has had exhibitions throughout the United States, Europe and Latin America, including the Villa Bardini Museum in Florence, Italy, the National Gallery in Costa Rica and the Frost Art Museum in Miami, Florida.
With his paintings, Santos proves that beauty is timeless. Influenced by the Renaissance, masters of the nineteenth century and Modernism, his works reflect both classical and modern interpretations. In many of his works, a refined painting technique comes together with colourful and at times abstract contemporary fragments. And the results are amazing: Men, women, and icons such as “The Girl with a Pearl Earring” and “Mona Lisa's Niece” become personages of today while keeping their original charm. His "Rebirth of Painting" above shows evidently his homage to classicism, but once again there are modern elements that surprise and intrigue. It will be interesting to watch this artist's maturation and development of a style that goes beyond the derivative.

A video about his activities (not only in painting!) can be seen here:
Posted by Intelliblog at 12:19