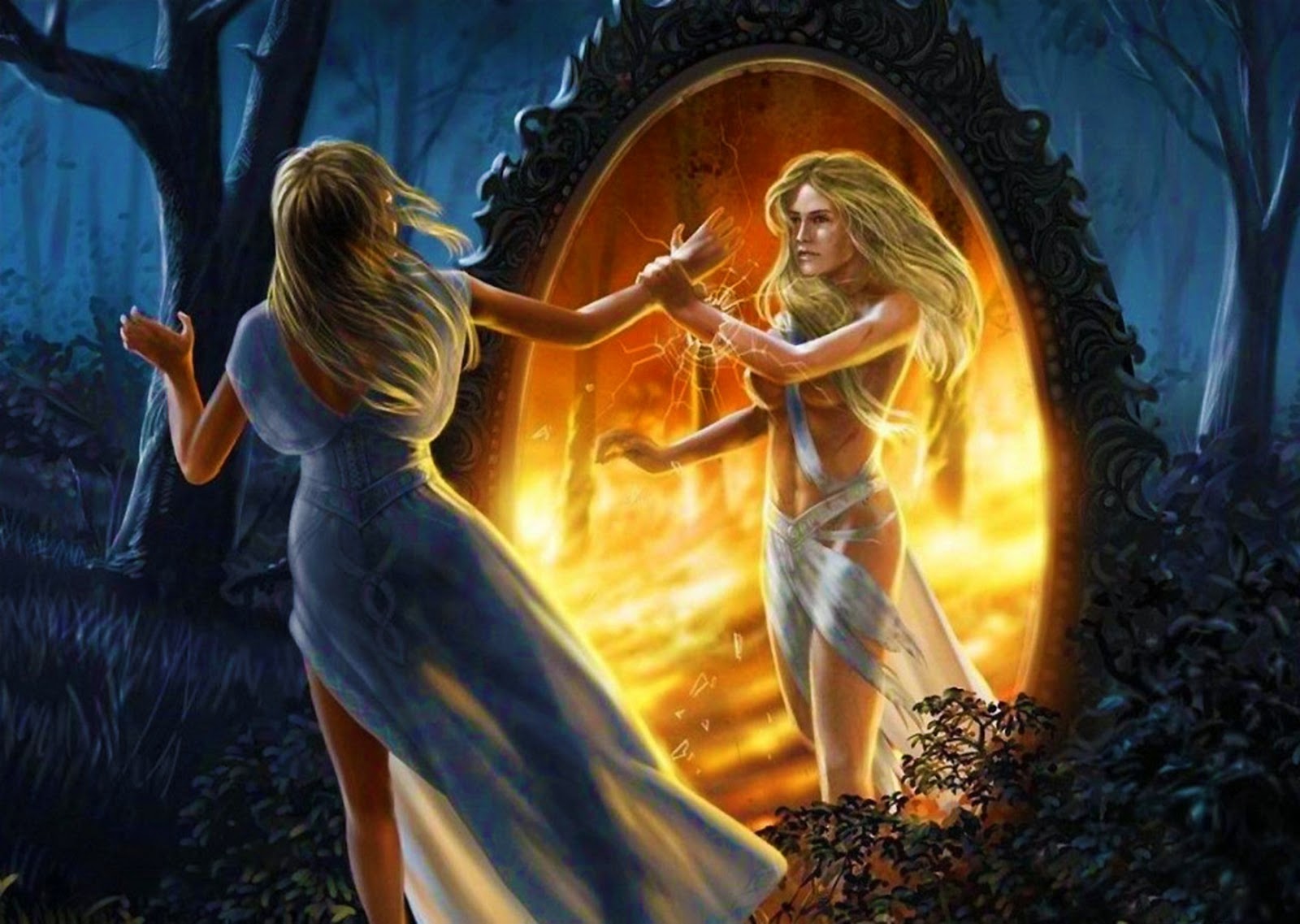 “Life is a mirror and will reflect back to the thinker what he thinks into it.” - Ernest Holmes

Mirrors have a long history of use both as household objects and as objects of decoration. The earliest mirrors were hand mirrors; those large enough to reflect the whole body did not appear until the 1st century AD. Hand mirrors were adopted by the Celts from the Romans and by the end of the Middle Ages had become quite common throughout Europe, usually being made of silver, or of polished bronze, as a cheaper alternative.

A typical mirror nowadays is a sheet of glass that is coated on its back with aluminium or silver such that it produces images by reflection. A method of backing a plate of flat glass with a thin sheet of reflecting metal came into widespread production in Venice during the 16th century; an amalgam of tin and mercury was the metal used. The chemical process of coating a glass surface with metallic silver was discovered by Justus von Liebig in 1835, and this advance inaugurated the modern techniques of mirror making.

Present-day mirrors are made by sputtering a thin layer of molten aluminium or silver onto the back of a plate of glass in a vacuum. In mirrors used in telescopes and other optical instruments, the aluminium is evaporated onto the front surface of the glass rather than on the back, in order to eliminate faint reflections from the glass itself. This gives clearer and sharper images of astronomical bodies.

Mirrors are much more than accessories of vanity.  Throughout history they have been used to predict the future, believed to have been capable of capturing and transporting souls, and to have been capable of reflecting happenings at other places and times.  Mirrors have also served as metaphors with many meanings, as symbols of divinity and power, implements of distortion, and tools for self-reflection.  The mirror, in its variety of forms and applications, has captured the human imagination and is the subject of much symbolism, folklore and myth.

In symbolism, the mirror can point towards truth, clarity and self-knowledge because its reflective qualities represent thinking. It is also an obvious symbol of vanity. Breaking a mirror is often said to bring bad luck because it is said to be harming oneself. However, this may have to do with first glass mirrors that were made which were extremely expensive and the bad luck story may have been a cautionary strategy in order to get people to look after these precious objects well.

Sylvia Plath, writing in 1961, gave the mirror the role of a rather cold, dispassionate companion on life’s journey:
“I am silver and exact. I have no preconceptions.
Whatever I see I swallow immediately
Just as it is, unmisted by love or dislike.
I am not cruel, only truthful-
The eye of a little god, four-cornered.”

St. Paul’s mirror metaphor in 1 Corinthians 13:12 relates: “For now we see through a glass, darkly; but then face to face: Now I know in part; but then shall I know even as also I am known.” This has been interpreted as meaning that man only sees through a glass, darkly and inaccurately, and signifies man’s earthly ignorance. St Paul implies that we can only become aware of the true face of God by gazing directly at him in the next life, as opposed to our perception of God “through a glass darkly” when we are alive.

In “Snow White”, the Mirror plays a very important role, being a cold, honest observer of the world and functioning much like Sylvia Plath’s looking glass. The mirror is both the servant and the master of the evil queen, forcing her to act in desperation in order to make the mirror reflect again the new truth of her own beauty once she destroys Snow White.

In “Alice’s Adventures Through the Looking Glass”, Lewis Carroll has Alice travel through the flat boundary of the mirror’s glass in order to reach a magic land full of surprises and quirky creatures that represent a distorted version of reality within the depths of Looking Glass Land.

Catoptromancy is the word used to describe the use of a mirror to predict the future. This is a more specific term than “scrying”, which means to foretell the future gazing into a crystal ball or any other reflective object or surface. Catoptromancy can involve an oracle that scries into a mirror and foretells the future, or it can be catoptromancy in which a god or a demon is invoked and it is these supernatural beings that will proclaim the future using the mirror as portal. Mirrors have always been regarded as “supernatural” and their use in catoptromancy as a means to revelation is not surprising.

Mirror images have been immortalised by many artists throughout the ages. For example, Van Eyck’s “The Arnolfini Portrait”, Velaszquez’s “Las Meninas”, Johannes Gumpp’s “Self-Portrait”, Manet’s “Bar at the Folies Bergére”, Picasso’s “Girl Before a Mirror” and M. C. Escher’s “Hand Holding a Reflective Sphere”. The way in which the artist may use the mirror as means of self-consciousness, both for himself as well as for the viewer is a powerful technique in such a voyeuristic medium as the portrait or self-portrait in art. This goes back to our own infancy, when we first begin to recognise our own reflection as being “us”, and this occurs at about the same time we first master the use of the pronouns “I” and “me” (from 20 to 24 months, when 65 percent of infants demonstrate recognition of their mirror images).
Posted by Intelliblog at 18:17