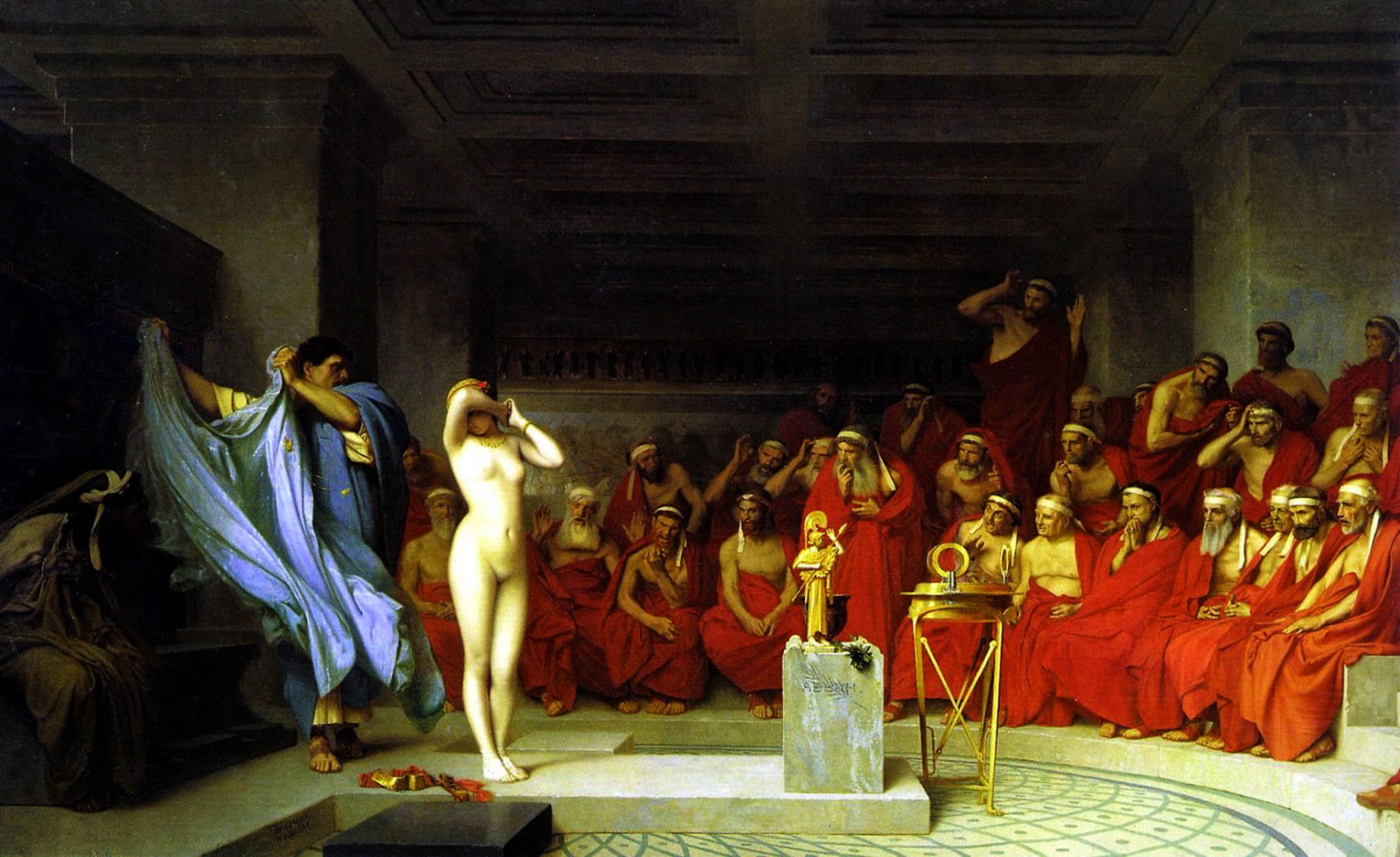 “Happiness is like a butterfly. The more you chase it, the more it will elude you. But if you turn your attention to other things, it comes and softly sits on your shoulder.” - L. Richard Lessor


The naked female figure has always been an important image in western art and civilisation. We still talk of the “naked truth” and many paintings take the opportunity to show truth as a beautiful woman, yes, naked. In classical times, goddesses (especially Aphrodite) were shown naked, their perfect body symbolising their divinity.

Phryne was a famous hetaera of Ancient Greece (390-330 BC) who adjusted her prices for customers depending upon how she felt about them. When the King of Lydia wanted her favours she named a truly absurd price because she considered him loathsome; he paid the price and then levied a tax on his subjects to raise the sum. On the other hand, she gave herself to the philosopher Diogenes for free because she admired his mind.

Famously, when she was tried for “impiety” for impersonating Aphrodite in the nude during public festivals, the case was nearly lost and Phryne was ready for the death penalty, when at the prompting of her unconventional counsel and orator Hypereides, she avoided conviction by lowering her robe and revealing her flawless breasts. The judges relented and let her off – not because they were overcome by her body, but because physical beauty was often seen as a facet of divinity or a mark of divine favour.

Athenaeus of Naucratis has the following to say about the event:
“When she (i.e. Phryne) was brought to trial by Euthias on a capital charge she was acquitted; this so enraged Euthias that he never afterwards pleaded another case at law, according to Hermippus. As Hypereides, while defending Phryne, was making no progress in his plea, and it became apparent that the judges meant to condemn her, he caused her to be brought where all could see her; tearing off her undervests he laid bare her bosom and broke into such piteous lamentation in his peroration at the sight of her, that he caused the judges to feel superstitious fear of this handmaid and ministrant of Aphrodite, and indulging their feeling of compassion, they refrained from putting her to death.

And after she had been acquitted a decree was passed that no person speaking in a defendant’s behalf should indulge in lamentation, nor should the accused man or woman on trial be bared for all to see. As a matter of fact, Phryne was more beautiful in the unseen parts. Hence one could not easily catch a glimpse of her naked; for she always wore a tunic, which wrapped her body closely, and she did not resort to the public baths.

At the great assembly of the Eleusinia and at the festival of Poseidon, in full sight of the whole Greek world, she removed only her cloak and let down her long hair before stepping into the water; she was the model for Apelles when he painted his ‘Aphrodite Rising from the Sea’. So, too, the sculptor Praxiteles, being in love with her, modelled his Cnidian Aphrodite from her, and on the pedestal of his Eros below the stage of the theatre he wrote an epigram:
‘Praxiteles hath portrayed to perfection the Passion (Eros) which he bore, drawing his model from the depths of his own heart and dedicating Me to Phryne as the price of Me. The spell of love which I cast comes no longer from my arrow, but from gazing upon Me.’”

In mediaeval times the naked body was considered to be a mark of lasciviousness and corruption and it was in the Renaissance that the classical ideals were once again revived and the naked figure once again glorified.

The painting above is “Phryne Before the Areopagus”, by Jean-Léon Gérôme, who has taken the incident a little bit further than what actually happened!
Posted by Intelliblog at 10:30